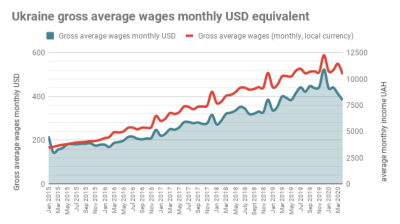 The largest nominal average wage decline was in hospitality and restaurant services (-46.4%), real estate services (-13.1% y/y), and information and telecommunication services (-10.7% y/y). Within the industrial sector, the highest decline of nominal wages was in the textile industry (-31.6% y/y), machinery (-16.1% y/y) and furniture manufacturing (-13.9% y/y).

“The severe quarantine measures that were in place the whole month of April resulted in significant cooling of business activity and dropping wages. However, the decline was not devastating and mostly affected those sectors in which activity was largely prohibited. Meanwhile, the enterprises involved in support services were less affected, as well as those with a continuous production cycle,” Evgeniya Akhtyrko of Concorde Capital said in a note. “We are likely to see a similar wage trend in May, as quarantine and lockdown restrictions were in place for the most of the month.”

Romania’s trade gap narrows in May despite weak exports

The foreign trade gap in Romania contracted by 15.6% y/y to €1.25bn in May, but the latest foreign trade numbers don’t bring much optimism.

June was the fifth consecutive month of PPI deflation after factory gate prices decreased 16.4% y/y in May.

Romania’s trade gap narrows in May despite weak exports
1 day ago
Lithuanian PPI deflation eases to -11.4% y/y in June
2 days ago
Czech industrial production down by 25% y/y in May, up 13.8% m/m
5 days ago
Foreigners’ share at Borsa Istanbul falls below 50%
6 days ago
Albania’s annual CPI inflation slows to 1.8% in June
6 days ago