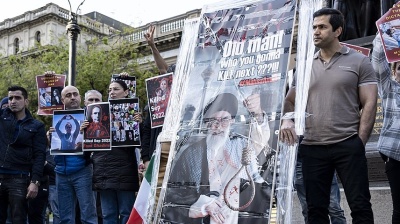 Demonstrations in solidarity with the protesters in Iran, such as this one in Melbourne, Australia, have been held all around the world. The regime has, however, disconnected Iran from the world by taking much of the country offline. / Matt Hrkac, Geelong/Melbourne/Austr., cc-by-sa 2.0
By bne IntelIiNews September 29, 2022

The damage done to Iran’s digital economy by the authorities’ throttling and blacking out of the internet and social media in the face of the deadly unrest that has swept the country in the past two weeks is immense.

That’s the worry of Mehdi Bashartadeh, an economic researcher, who spoke with ISNA about how Iranian businesses are particularly hamstrung by the authorities’ creation of what traders are describing as a social media “desert”.

"The cutting off of access to Instagram [for instance] has put more than 400,000 businesses at risk of annihilation and has caused serious problems for the livelihoods of more than a million people," Bashartadeh was quoted as saying.

He added: “The jobs of about 10 million people and 2.4 million businesses in the country [of 85mn] depend on Instagram, and closing it will cause huge losses to the economy, families and the country.”

The E-commerce Association of Iran also came to the conclusion that 400,000 Iranian businesses were at risk of going bust due to the “filtering” of Instagram, used for a massive amount of marketing and shopping in the country.

Majid, a businessman in Iran who spoke with bne IntelliNews on condition that his surname was withheld, said: “Well, they cannot keep this [interference with the internet and social media] up for long because this in itself will become a factor in raising the level of discontent in society.”

Saman, who works in marketing in Tehran, told this publication that dealing with clients inside the country and reaching people abroad has become more and more difficult.

“We lost the ability to connect to the VPN from about 5pm last night [September 28] until about 10am this morning but otherwise, all is calm,” he said, adding that he felt the situation in the capital was this week entirely quiet following the wave of protests that shook the city earlier.

Despite the lack of online possibilities, businesses, he said, were trying to resume but were struggling. “Nobody knows whether they’ll allow it [Instagram] again. It’s tough,” he added.

Shargh reported this week that Instagram and WhatsApp were unlikely to be returned to service inside Iran unless the social media services signed an agreement with the Islamic Republic authorities.

The newspaper cited an unnamed member of a working group set up to enforce the digital laws of the country, who said: “If Instagram and WhatsApp sign a contract and accept the conditions of the Islamic Republic of Iran and undertake to accept responsibility, there will be no prohibition on their activity.”

RBI's 2022 profits soar to €3.6bn, with Russian operations representing more than half
Romania gets European Commission’s green light for €1.6bn investment and development bank
M&A in Emerging Europe fell by 20% to €32.93bn in 2022