Remittances to Moldova spike in May amid lockdown relaxation in Europe 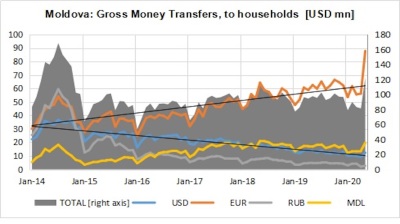 The robust increase is likely to reflect payments delayed during the lockdown period and they indicate that even if the overall remittances during the coronavirus crisis are likely to decline due to economic hardship, they will continue since workers abroad are anyway in a better financial position than their families home that are equally hit by the crisis.

In May, half of the money received by Moldovan households came from the European Union, 13.6% came from the Community of Independent States (CIS) and the remaining of 36.3% from other states, according to the BNM data. The transfers from Italy alone were 16.7% of the total. Germany accounted for another 11.9% of the transfers, followed by France (6.2%).

During March and April, the remittances to Moldovan households decreased by double-digit rates to around $100mn per month, after the movement restrictions firstly in Europe and then in Russia were imposed.

The recovery in May put the overall remittances in March-May roughly at $342mn, roughly at the same level as in the same three-month period last year.

The relaxation in Europe pushed the remittances denominated in euros to Moldova up by 40% in May compared to the same month last year — to €93mn from just over €60mn in each of the previous two months. In fact, the money transfers denominated in euros contracted only marginally in March and April, but this was a visible change of the trend after they posted annual growth rates of over 20% y/y in the previous months.

In contrast, the money transfers denominated in US dollars contracted by 11% y/y to $14.3mn in May after a 31% y/y plunge in April and 25% y/y decline in March.