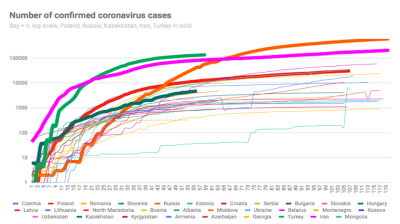 Several countries in emerging Europe have re-imposed border restrictions and other measures to prevent the spread of the novel coronavirus (COVID-19) after reporting spikes in new infections.

This includes fresh outbreaks in small Southeast European countries such as Montenegro – which declared itself coronavirus free at the beginning of the month after all active cases recovered – Bulgaria, Croatia and Slovenia.

In Croatia, which has lifted travel restrictions in the hope of saving some of its summer tourist season after new cases fell close to zero, 19 new cases were reported on June 22, and 30 on June 23.

Highlighting the risks as life gradually returns to normal, the outbreak occurred at an exhibition tennis tournament in the coastal city of Zadar, and high-profile tennis players Serbia’s Novak Djokovic (who organised the event), Bulgaria’s Grigor Dmitrov and Croatia’s Borna Coric said they were among those who tested positive for the virus. Prime Minister Andrej Plenkovic tested negative after attending the tournament.  The cause of a separate outbreak among nuns at Djakovo Convent is as yet unclear.

There have been recent spikes in infections in Albania, Bosnia & Herzegovina and North Macedonia, leading to a tightening of border restrictions in the region – though the total number of cases to date remains low compared to most West European countries.

On June 18, Montenegro again made wearing face masks in indoor public areas mandatory and imposed restrictions on entry from Bosnia as the number of people infected with coronavirus increased to 13, the national co-ordination body for the prevention of diseases (NKT) said.

Slovenia imposed quarantine for people coming from Serbia, Bosnia and Kosovo, starting from June 19, to prevent the import of coronavirus cases after the number of new infections in these countries rose recently. Slovenia was the first country in Europe that declared the end of its coronavirus epidemic in May.

Bulgaria’s government also decided on June 22 to tighten some restrictions, as the number of coronavirus cases has been increasing significantly for more than a week.

The country had lifted all restrictions and only left the mandatory wearing of face masks on public transport since June 15. However, the number of new cases has been exceeding 100 for days and on June 22 the government decided to restore mandatory mask-wearing in public indoor areas, hospitals and pharmacies. It also restored the mandatory distance of 1.5 metres between people in indoor areas, Health Minister Kiril Ananiev said at a press conference.

The head of the Department for Emergency Situations (DSU) in Bucharest, Raed Arafat, has warned that the epidemiological situation might force the Romanian authorities to defer the next relaxation stage, scheduled for July 1.

Arafat explained that there is mounting concern about the evolution of the number of infections, given that, in the second stage of relaxation, people no longer follow the rules as they did in the first phase. He stated that transmission is already pretty high and will accelerate after more relaxation measures are allowed.

Ukraine’s Prime Minister Denys Shmyhal announced a record 921 infections in 24 hours on June 17, and 4,853 in the preceding seven days.

Kyiv has already extended the quarantine restrictions until July 31 due to the growing number of patients with COVID-19.

As in Romania, the easing of restrictions has led to a lack of caution resulting in new infections. "The weakening of quarantine measures was taken by many as the abolition of quarantine, hence it resulted into such worsening of the situation," the government media office quoted Shmyhal as saying. "The coronavirus has not disappeared and the threats posed by it to our medical system and to the Ukrainian economy, unfortunately, have not diminished."

Further east, Kazakhstan has also re-imposed restrictions, including shutting down shopping and entertainment centres, trading houses, chain stores, indoor markets and bazaars on June 18, amid a rise in the number of infections in several regions of the country. Among those who have tested positive for the virus is Kazakhstan's former (and first) president, Nursultan Nazarbayev, aged 79.

Kazakhstan is also set to impose a two-day lockdown in the northern city of Kostanay and four towns that surround it on June 27-28 following a jump in fresh coronavirus cases, according to local media. The move is part of a trend for bringing in weekend restrictions deployed by the Central Asian nation. Similar restrictions were announced in the commercial capital Almaty on June 20-21. The measures are an attempt to curb the spread of the virus, while minimising the impact of the pandemic on the economy.

Azerbaijanis are now only permitted to leave home "once a day for a maximum of two hours after receiving permission via text message" from the authorities, Prime Minister Ali Asadov said in a June 21 statement on Azerbaijan’s reinstatement of a tight lockdown to battle a resurgent outbreak of the coronavirus. Previously, Azerbaijan’s state of emergency was lifted on May 31, with most restrictions relaxed.

Next-door Iran and Armenia are also dealing with new surges in infections.

Still, the trend across the region is for an easing of restrictions, even with the high infection numbers in some countries, as the pressure is on governments to restore economic activity.

And there is better news from Russia, the location of the region’s largest outbreak and the third largest in the world after the US and Brazil. For the last week the daily number of new infections in Russia has been below 8,000, the lowest level since late April.

Things are returning to normal in Russia too, where the Moscow dining market has reached 65% of its pre-pandemic turnover after limitations were gradually eased, and summer terraces are filling up.

Restaurants in Moscow were allowed to open summer terraces from June 16, in addition to the ongoing take-away services, while all limitations are being lifted from June 23.