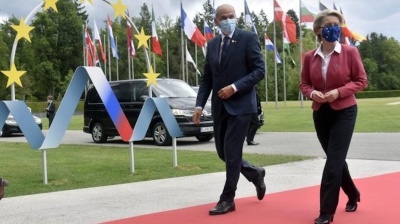 Slovenia embarked upon its second six-month presidency of the EU Council on July 1, a day on which the rifts between right-wing Slovenian Prime Minister Janez Jansa and EU officials were on public display.

The presidency started at a point where Ljubljana has increasingly been at odds with Brussels over a range of issues including media freedom in the country and the appointment of Slovenia’s European prosecutors. Jansa also reportedly backed Hungarian PM Viktor Orban in his recent spat with Brussels over Budapest’s anti-LGBT regulation.

Several of these issues were raised by European Commission President Ursula von der Leyen at a sometimes tense joint press conference with Jansa to mark the start of the presidency.

Talking of the importance of trust as EU members prepare for recovery, von der Leyen referred to “trust in free and independent and properly funded media, trust that freedom of expression diversity and equality are always respected and that the rule of law and European values are always upheld. This is the very essence of our European Union.”

In response to a separate question, von der Leyen stressed the importance of free media for oversight, calling this “the essence of democracy”. “We think Slovenia must provide the independence and the funding of the public service provider,” she said.

Slovenia’s failure so far to name its representatives to the new European Public Prosecutors Office (EPPO) also came up, with von der Leyen urging Jansa to do so urgently.

European Commission Vice President Frans Timmermans was conspicuously absent from the group photo, saying in a statement quoted by newswires that he “simply could not be on the same podium with PM Jansa” after a row between the two earlier in the day.

Reportedly Jansa showed EU officials a photograph of a Slovenian judge with an MEP from Timmermans’ Socialist and Democrats and members of Slovenia’s opposition Social Democrats, making a point about judicial bias.

In response to a journalist question, von der Leyen commented: “of course judges are people with a biography, they have their own life, they can be members of parties. This is a fact in every democracy and we expect respect towards different political parties.”

The divisions overshadowed the pressing business of supporting the 27 EU member states’ recovery from the coronavirus (COVID-19) pandemic.

In this area, “the Slovenian presidency will be decisive, the tasks will be challenging. It is no less than laying the ground for our future prosperity by setting Next Generation EU in motion and really implementing it now on the ground,” von der Leyen told the joint press conference with Jansa.

A statement from the Slovenian government said that during its presidency the country will “strive to facilitate the EU's recovery and reinforce its resilience, reflect on the future of Europe, strengthen the rule of law and European values, and increase security and stability in the European neighbourhood.”

Foreign Minister Anze Logar emphasised that Slovenia is taking over the rotating presidency at a time when the EU is adopting important packages concerning the green and digital transformation and the building of the EU's resilience. "The presidency is an opportunity to strengthen the integration within the EU27 and within EU institutions and to direct development towards an innovative and creative community based on sustainable development,” Logar said.