Russia is not joking about in Ukraine, but their efforts to justify its invasion are risible. / wiki
By Julian Rimmer in London July 6, 2022

The Ukrainian War is no laughing matter, but the Russians are doing their level best to make it funny. As Larkin wrote, they may not mean to, but they do. While there is seemingly no aspect of this conflict that has not been subjected to forensic examination by the kommentariat in the last four months, observers have overlooked the comedy inadvertently provided by the Kremlin.

The importance of humour as a means of undermining an authoritarian state cannot be overplayed. Totalitarian regimes despise jokes because each one is a tiny revolution, they crack the porcelain bauble of the dictator’s distended ego and undermine the authority he (and it’s always a he) projects. Sedition thrives amid the irony. Ridicule of the system weakened the Soviet Union and helped bring about its collapse.

All of which more than justifies casting a scornful eye over the farce masquerading as a ‘special military operation’ and poking fun at the unintentional slapstick which has characterised the invasion of Ukraine.

Despite their fearsome reputation for martial prowess, Russian troops have seemed anything but when captured. Callow youths bawl and call their mums. Bravery would appear to be redefined as holding a man down while someone else tortures him, as if it were a Navalny protest, or trussing him up before applying similar techniques to those used at Katyn. The lasting image of this conflict will be Dagestani conscripts loading second-hand washing machines onto their tanks. 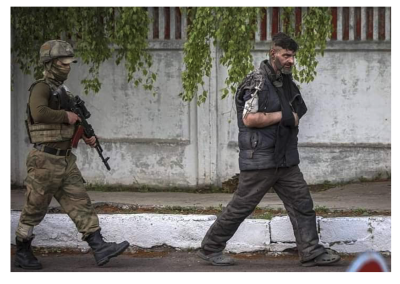 Photos like the one above suggest recruiting sergeants have few criteria for selection other than the correct limb count. Every new military commander appointed by Putin looks fatter than his predecessor and whether it’s Shoigu, Dvornikov or Zidhko, the abdominal convexity of their uniforms suggests they have all eaten too many pirozhki. ‘Battle-hardened’ generals with enough medals pinned to their chest to cause a commodity supercycle have nothing more courageous on their CVs than Chechnya in the 1990s (they actually lost the first war), defeat of the tiny Georgian army in 2008, the border skirmish in Ukraine of 2014 and erm, the high-altitude, low-precision bombing of the somewhat less than invincible Syrian opposition forces in 2016.

There are, then, few honours on the escutcheon. Despite giving it the big ’un on the global stage for the last two decades, Russia’s military strategy looks to have been devised by Gengis Khan and if one extrapolates the ~30,000 lives expended to capture one fifth of Ukraine’s territory thus far there’ll be very few soldiers remaining to goosestep round Red Square next May 9 even if they succeed in denazifying and demilitarising the whole country. 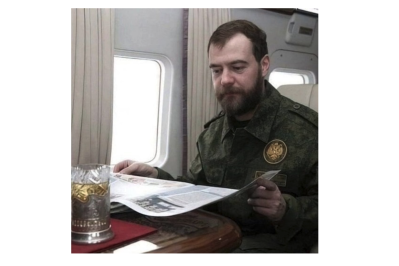 Oscar Wilde quipped ‘One must have a heart of stone to read Little Nell without laughing’ and I feel exactly the same about former president Medvedev, that debonair badminton player, wearing military fatigues and sporting a beard on what looks suspiciously like a private jet.

The only thing more ludicrous was the image of that simian Kadyrov, whose fringe grows low on the forehead, wearing a pair of fifteen hundred-buck Prada boots – with stack heels. 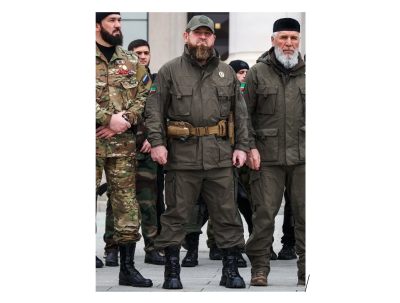 These boots are made for walking – round a shopping mall.

And what about Putin, old football face himself? While his porcine eyes sink ever deeper into the sockets drilled into those puffy cheeks and jowls, the inscrutable expression prevails at the other end of a very long table. I’m reminded of the character in ‘Castaway’. Not Tom Hanks but Wilson the volleyball. 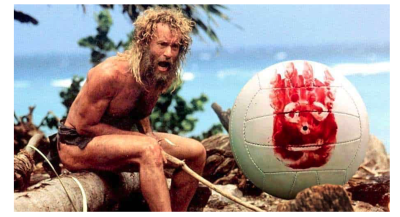 Kremlin propaganda is so hilariously cack-handed it’s more of a liability than an asset. Most of it makes perfect sense if you interpose the word ‘not’ into every sentence publicly uttered. Civilian deaths during the invasion are all elaborately stage managed and nothing more than provokatsiya. One suspects that if Putin were to wipe Ukraine off the map with a nuclear weapon, it would be dismissed as Russophobic provocation’ by the victims. The sinking of the Moskva was an accident. The withdrawal from Snake Island was a gesture of goodwill. Towns are rubbled in order to liberate them. Fifty years after Ben Tre in the Vietnamese War, Russians are deploying the same logic: ‘It became necessary to destroy Ukraine to save it’.

Of course, if you listen to Kremlin mouthpieces then sanctions are, of course, a mere fleabite to Putin’s puissance. Perhaps Russians are self-sufficient in fast food since they took over the McDonald's franchise. The food could not reasonably be expected to deteriorate. IKEA closed its business in Russia and I wondered if we should invade Ukraine on that basis? Will the Kremlin derive sufficient consolation from this to compensate for the loss of $250bn of currency reserves held offshore? Putin will insist this is a war of national security and so the money does not matter. In my experience, however, when people say it’s not about the money, it’s definitely about the money.

Still, the amount of energy expended explaining why sanctions have no impact implies they doth protest too much. Russian autos are now produced without airbags and if there’s one feature of a car I’d regard as essential in Russia, even more than the wheels, it’s the airbag. I also don’t understand why oligarchs allow the seizure of their yachts abroad. If your boat will be detained in the Med why not sail the Murmansk to Kamchatka route along Russia’s Arctic coastline? You’re safe from international piracy there.

If you like your comedy stand-up, though, there is nothing more gutbustingly hysterical than Russian television. There’s no need for light entertainment or sitcoms on the box when you have geopolitical talk shows occupying most of prime-time. These debates consist of swivel-eyed political scientists (a descriptor unknown elsewhere) and overweight, superannuated generals competing to make the most bloodcurdling threats about emptying Russia’s thermo-nuclear arsenal on the US, the EU or Nato. Light relief is provided by footage of the artillery bombardment of Ukrainian villages or the most offensive host complaining about the sequestration of his holiday apartments in Lake Como. 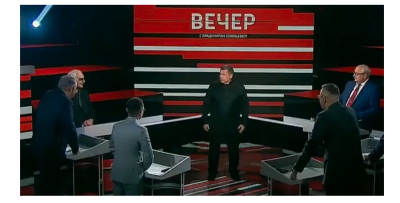 The only moments of fleeting goodwill are reserved for nostalgia about the Trump administration or hope that Tucker Carlson may one day replace him.

Laughter, then, holding up Putin to scorn and derision, is one of the best weapons at the West’s – and Ukraine’s disposal. Sooner or later, someone will update ‘Springtime for Hitler’ for his benefit. Dictators tend not to have a sense of humour because they lack the prerequisite self-awareness and cannot defend themselves against it. Humiliation is what they fear most. Through the tragedy, keep the guffaws coming. There’s no shortage of material.