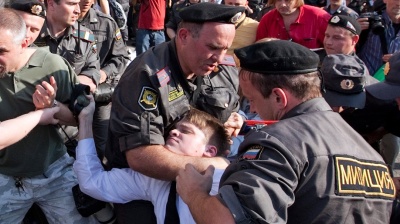 Officers of a Russian 'OMON' special police unit seen cracking down on a freedom of assembly protest.
By bne IntelIiNews July 22, 2020

Turkey, Iran and Russia are among 37 emerging and frontier market countries likely to face mass protests in the coming months as restrictions imposed to control the coronavirus (COVID-19) pandemic are increasingly lifted and the huge economic impact of the crisis is realised, according to new research from a global risk analysis company.

“The total number of protests in frontier and emerging markets has almost rebounded to pre-pandemic levels,” said Verisk Maplecroft principal analyst Miha Hribernik. “With many countries still in lockdown, and the full economic shock of the outbreak yet to be felt, we expect the number of protests to surge over the next 2-3 months.” 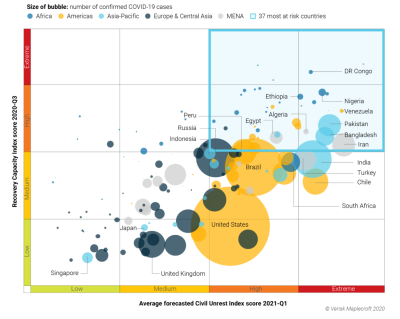 37 countries with high pre-existing levels of unrest and poor pandemic recovery capacity are said to face a 'perfect storm' of instability over the next 2-3 years.

Verisk Maplecroft concluded that the outlook was particularly worrying for frontier and emerging markets where the post-pandemic economic outlook is bleak. Iran, Nigeria, Bangladesh, Algeria and Ethiopia are among countries facing a “perfect storm” of grassroots anger—protests triggered by the pandemic’s economic fallout look set to combine with unrest over pre-existing grievances over issues ranging from poverty to food supply, it said.

“Our base case from January—that 2020 will see a surge in protests and that the coming decade is set to be one of unprecedented unrest—still stands,” said Hribernik. “But in the countries least prepared to bounce back from the pandemic, it now looks like a best-case scenario.”

Russia, Turkey, India, Brazil, South Africa and Indonesia face risks that are only slightly less acute than those of the countries with the most “perfect storm” potential, the report added.

Belarus, Bulgaria and Serbia, as well as Congo and Ethiopia, are among countries to have been shaken by anti-government protests in recent days.

There was a drop-off in unrest in emerging and frontier markets in March, according to Armed Conflict Location & Event Data (ACLED), after the widespread introduction of lockdowns. But with the International Monetary Fund (IMF) forecasting that growth in emerging markets and developing economies will contract by 1% this year, certain simmering pots of tension may come to the boil.

Hribernik used five factors to determine the ability of 142 countries to bounce back from the pandemic. That was combined with data from past protests to determine projections of civil unrest. “It’s a tinderbox” Hribernik said. “It doesn’t take as much as it did a year ago.”

In 2019, Verisk Maplecroft recorded 47 countries with a significant uptick in demonstrations, including Hong Kong, Chile, Nigeria, Sudan and Haiti. It anticipated more turmoil in 2020. “It was very much a global phenomenon last year” said Hribernik. “Each protest was unique, primality driven by anger over inequality, corruption, erosion of trust of political elites. These are not issues that can be resolved overnight. They are structural issues that take years or decades to address.”