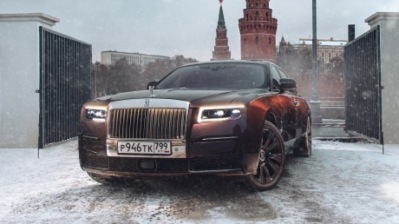 Rolls-Royce sold its first ever car to Russia in 1910 during the Tsarist era, and last year sold 200 cars to rich Russians
By bne IntelliNews February 22, 2021

Rolls-Royce Motor Cars announced a new sales record in Russia for 2020, delivering more than 200 vehicles to customers, the company said in a press release in January.

The company sold its first ever car to Russia in 1910 during the Tsarist era, and has re-established sales following the collapse of the Soviet Union.

Sales in 2020 were up 4% year on year, making Russia “once again the largest market for the brand in continental Europe, and Moscow dealers top the list of European Rolls-Royce dealers,” the company said.

Julian Jenkins, regional director of Rolls-Royce Motor Cars Europe, commented: “We are proud of this impressive performance in Russia, especially during these challenging times. I want to thank our dealers in Moscow and St. Petersburg for the individual approach, which made it possible to cope with the challenges of the times, and the colossal efforts to achieve this result. "

The Cullinan and Black Badge models are key growth drivers for sales, says Rolls-Royce, while the Phantom flagship model is in constant demand.

Following the Russian premiere of the new Rolls-Royce Ghost in October 2020, the brand begins the first deliveries of the new product to the Russian market this year and the first Ghost customers will receive their car keys by the end of the month.

There are three official Rolls-Royce Motor Cars dealerships in Russia: two in Moscow and one in St. Petersburg. Moscow is the first city in the world with two Rolls-Royce dealers. In the Russian capital, the only Provenance Pre-Owned showroom in Europe has also opened, confirming the interest of customers in the programme of selling used cars.

Russian government may cut borrowing this year by RUB0.5-1 trillion over more US sanctions fears