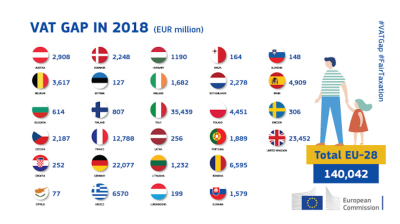 Romania posted the highest national relative VAT gap in the European Union (EU) in 2018, with 33.8% of its potential VAT revenues going missing, according to the European Commission’s VAT Gap 2020 Report.

In absolute terms, Romania failed to collect €6.6bn, or 3.3% of its GDP — nearly five times more than the EU average.

The VAT gap, which is the difference between expected VAT revenues and VAT actually collected, provides an estimate of revenue loss due to tax fraud, tax evasion and tax avoidance, but also due to bankruptcies, financial insolvencies or miscalculations.

European Union countries lost an estimated €140bn in VAT revenues in 2018. The VAT gap has improved marginally in recent years. However, figures for 2020 forecast a reversal of this trend, with a potential loss of €164bn due to the effects of the coronavirus pandemic on the economy, according to EC estimates.