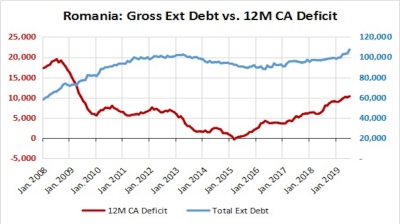 The CA deficit is one of the main threats to Romania’s macroeconomic sustainability with the other being the budget deficit.

Although the CA deficit, FDI and external debt have all risen fast over the last few years, FDI is not keeping pace with the widening external deficit and this resulted in rising gross external debt that has been partly offset by the robust GDP growth (particularly in nominal terms) and the external indebtedness (the debt to GDP ratio) has actually improved compared to several years ago.

Thus, FDI covered less than 54% of the CA gap in the past 12 months, compared to a ratio of nearly 73% during the previous 12 months.

However, the debt to GDP ratio has improved significantly compared to the end of 2015: from 57.4% to 51.1%. Indeed, one year earlier at the end of July 2018 the ratio was lower (50.4%) and this indicates a certain deterioration of the country’s external position. But from a broader perspective the ratio is certainly not on a steep upward pattern and possibly not even rising.

The rise in external debt over the past 12 months might overstate the need to finance the CA deficit and has partly contributed to the accumulation of foreign reserves, more detailed analysis shows.

The IMF projects Romania’s CA gap will rise from 4.5% of GDP last year to 5.5% of GDP in 2019 to narrow to 5.2% of GDP in 2020. However, the fund expects, on a rather optimistic note based on robust GDP growth, the external debt to GDP ratio to actually narrow from 48.5% at the end of 2018 to 46.5% two years later, at the end of 2020. A key assumption here is the share of the CA gap financed by FDI and transfers from the EU budget, both of which have been sluggish recently.

Romania government to pursue “ambitious” timetable for justice reforms
M&A in Central and Eastern Europe fell 16% in value in 2020, says CMS report
Private finance mobilised by development banks up 9% to $175bn in 2019

National Bank of Ukraine retains a key policy rate at 6%, the outlook of the CPI deteriorates

The National Bank of Ukraine (NBU) has declared that it agreed not to adjust its main policy rate at its monetary policy board meeting on January 21, holding it at 6%.

Polish industrial production continues boom in December
11 hours ago
Slovenia’s economic sentiment indicator up 2.2 pp m/m in January
8 hours ago
National Bank of Ukraine retains a key policy rate at 6%, the outlook of the CPI deteriorates
2 days ago
Russia's National Welfare Fund accounts for almost 12% of GDP
3 days ago
Bosnia's exports in 2020 amounted to BAM10.5bn, trade deficit to BAM6.3bn
4 days ago