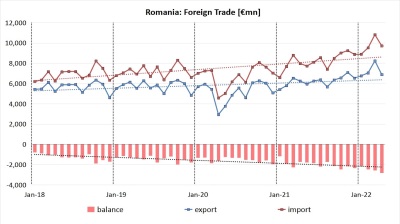 Detailed data for the first four months of the year show that the rising price of commodities is pushing up both exports and imports.

The trade deficit thus diverged from the medium-term trend, it was slightly larger, amid slightly less intense foreign trade activity compared to the previous months.

Poland’s CPI growth rate picks up just 0.1pp to 15.6% y/y in July
2 days ago
Romanian stock exchange reaches new record as BET-TR rises 5.7% ytd
2 days ago
Population decline to take Emerging Europe back to the early 20th century
2 days ago
Russia’s international reserves up $3.6bn in one week to $571bn
3 days ago
CPI inflation in Moldova hits 33.6% y/y in July
3 days ago