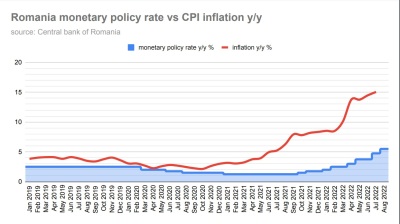 National Bank of Romania (BNR) decided to hike the refinancing rate by only 0.75bp to 5.5% on August 5.

It was a more cautious step after the 100bp rate hike in July — the seventh and the largest step taken since the monetary normalisation cycle began last October — and less than analysts expected. The BNR said it expects no further rise in inflation over the coming two quarters and is concerned about the economic stagnation in the second and third quarters of 2022.

At the same time, however, the latest data point to a quasi-standstill of economic activity both in Q2 and Q3, under the impact of the war in Ukraine and the associated sanctions, the BNR argued.

Furthermore, GDP developments in Q2 imply a marked decline in the annual growth rate during this period, yet amid the robust rise in private consumption, on account of a base effect.

In the labour market, the number of employees in the economy continued to rise at a sustained pace in April-May, almost entirely on account of hiring in the private sector, and the ILO unemployment rate further declined to 5.3% in June, yet remaining slightly above pre-pandemic values.

Also supporting the decision to make a milder rate hike, the local currency demonstrates resilience (even marginal strengthening versus the euro) and the credit to the private sector picked up further in June, reaching 17.5% y/y (16.5% y/y in May).

The uncertainties are tilted towards slower growth — due to a list of risks ranging from the war in Ukraine to the fiscal policy stance.

The BNR said that its decisions aim to anchor inflation expectations over the medium term, as well as to foster saving through higher bank rates, so as to bring back the annual inflation rate in line with the 2.5% ±1pp flat target on a lasting basis, in a manner conducive to achieving sustainable economic growth.

NEMETHY: Is the world heading towards a “polycrisis”?
Bonds of Romanian online retailer Elefant plunge on weak H1 results
Romanian president tries to save flagship education strategy after plagiarism scandal