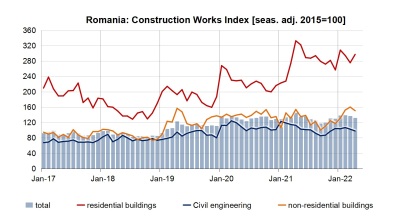 The construction works volume index in Romania contracted by 9.5% y/y in April and it dropped by 3.4% compared to March (in seasonally adjusted terms), the statistics office INS announced. For the first four months of the year, the index advanced by a mere 1% y/y.

The situation is not as dramatic as April figures may suggest, but the construction activity in Romania — as hinted at by the January-April figures — is heading towards the second year of stagnation after it edged down by 0.6% in 2021.

This shouldn’t be the case, given the ambitious projects outlined under the Relaunch and Resilience Facility — but the rising cost of construction materials and the inelastic supply of workers are significant deterrents to the sector’s growth.

In April, the seasonally-adjusted construction index has declined for the second month in a row, reversing a large part of the gain accumulated over the previous four months — which results in a profile of rather steady activity that would require supplementary resources for the activity to increase sustainably above the levels seen over the past couple of years.

The sector of non-residential buildings (-2.3% y/y in April) marked a negative monthly change (-5.9% m/m) after an impressive 60% advance over the previous half a year, in seasonally adjusted terms. Overall, it remains around the average levels seen in 2020-2021.

The civil engineering works (-14.2% y/y in April) lost intensity for the second month in a row and remain vulnerable to the government’s narrow fiscal space.

Even the residential buildings segment contracted by 10.1% y/y in April, while remaining close to the high levels seen during the previous 12 months.

Hungary’s jobless rate inches down to 3.5% in May
1 day ago
Polish retail sales growth eases to 8.2% y/y in May
2 days ago
Ruble rises to seven-year high, best performing currency in the world
3 days ago
Polish PPI inflation accelerates to 24.7% y/y in May
3 days ago
Bulgaria posts highest inflation in SEE amongst EU peers
4 days ago