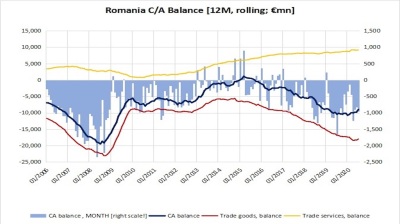 Romania’s current account (CA) balance narrowed to €4.86bn in January-July, one fifth (19.5%) less than in the same period last year. The correction is deeply related to the effects of the crisis: fewer holidays abroad and lower dividends, interest derived by foreign investors.

The balance of tourism (fewer holidays abroad) and that of primary incomes (lower interest and dividends earned by foreign investors) have improved the balance, particularly after the crisis hit the country in March-July.

Thus, the outflows of primary incomes (dividends, interest repatriated by foreign investors) shrank from €4.6bn in March-July 2019 to €3.1bn in the same period this year.

Meanwhile, the outflows under the tourism category (services) contracted from €2.2bn in March-July last year to only €0.8bn in the same period this year.

The inflows of secondary incomes to public administration entities (mostly EU funds) increased significantly but from a low base, from €280mn in March-July last year to €570mn in the same period this year.

Foreign direct investments (FDI) in January-July this year plunged to €1.30bn from €3.35bn in the same period last year. But a large part of the contraction was marked in January-February (from €1.4bn to negative, or net FDI outflows, €0.3bn).

The downside of fewer dividends derived by FDI investors in March-July was the weak volume of FDI in the period, €1.62bn, compared to €1.95bn in the same period last year. The contraction was, however, not major compared to that seen in January-February and the expected effects of the crisis.

But the FDI in the five-month crisis period this year came mostly as intra-group loans extended by parent companies of local FDI companies (€1.3bn versus virtually zero in the same period last year).

Russian corporate profits continue to recover, and caught up with 2019 earnings in July

Russian corporate profits are maintaining their recovery and on a cumulative basis continue to claw back ground lost in the second quarter during the worst of the coronacrisis. Monthly corporate profits were back at the same level they were in July.