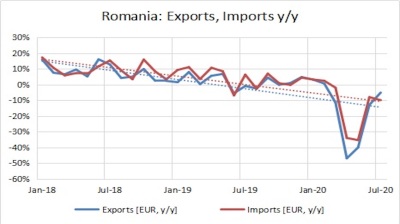 By Iulian Ernst in Bucharest September 10, 2020

This is the best performance since the coronavirus (COVID-19) pandemic hit global trade in March and a moderate, single-digit, performance in absolute terms. It marks the return to the pre-crisis path, which was far from bullish, however: in 2019, the country’s exports rose by less than 2%.

Meanwhile, the trend exports, meaning the cumulative exports over the rolling 12 months, continued sliding to €62.4bn as of July, the weakest performance since November 2017. In February, before the COVID-19 pandemic started, the country's 12-month exports exceeded €69.2bn.

Imports have contracted as well since the crisis began, but to a smaller extent: the imports over the rolling 12 months eased to €80.2bn in July (close to the level seen in July 2018), from €86.7bn in February. While the trend exports dropped by 8.9% since February, the trend imports contracted by only 7.4%. This, however, resulted in a smaller trade gap over the past 12 months ending July: €17.8bn, 1.4% less than in February.

The robust rise in households' incomes is visibly behind the more moderate contraction of imports, compared to the fall in exports driven by the standstill in global trade.

In July alone, imports contracted by 9.9% y/y — more than the exports indeed, but this is rather an effect of the volatility. The outstanding performance of the retail sales in July invalidates the hypothesis of shrinking private consumption implied by the imports' performance.

Nonetheless, due to smaller imports in July, the trade gap in the month contracted by an impressive 26% y/y. It is a statistical record, with little impact in the real economy, though. But it is true that the trend data indicate that the deficit has been rising at slower rates recently.