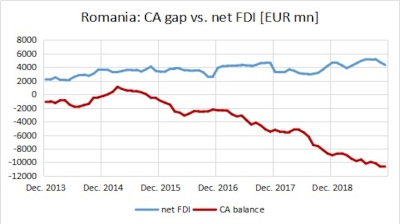 Romania’s current account (CA) deficit reached €10.7bn (nearly 4.9% of GDP) in the 12-month rolling period ending November, 22.7% up y/y, which puts pressure on the gross external debt under the circumstances of moderate foreign direct investments (FDI) that currently cover only half of the CA gap.

The country’s CA gap reached €9.9bn during January-November 2019, up by almost 21% y/y, according to the central bank. Just over half of the current account was covered by the foreign direct investments (€5.15bn, a small 2.6% up y/y) and consequently the gross external debt rose by another €7.3bn, or the equivalent of more than 3% of GDP, during the first eleven months of the year.

The debt to GDP ratio stayed, however, below 50% helped by the still robust increase of the GDP.

Broken down by the main accounts, the balance of goods made the greatest contribution to the deficit: €15.6bn or 18.9% up y/y. The surplus of trade with services (net export) edged up by only 1.8% y/y to €7.8bn and financed roughly half of the net import of goods.

The balance of primary incomes registered a smaller deficit (-13% y/y), namely €3.2bn, which accounts broadly for the profit generated by the capital poured in by foreign investors and to a smaller extent the wages earned by foreign employees.

The balance of secondary incomes posted a 15% advance in January-November compared to the same period in the previous year, €1bn, and stand for the net transfers including from the European Commission.