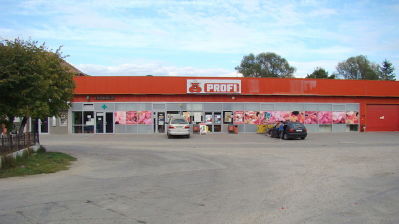 A Profi supermarket in Panticeu, Cluj county. Profi says it is looking to increase its staff to handle robust demand.
By Iulian Ernst in Bucharest March 24, 2020

Hypermarkets, supermarkets and food stores in Romania — as in other coronavirus (COVID19)-hit countries — have seen robust demand in the last two weeks as the population has been seeking to build up reserves.

E-commerce and online retail are likely to see strong growth with marketplaces such as Emag or Altex ready to supply food and other household goods in addition to the traditional IT and electronics goods sold online.

In aggregated terms, these micro-level developments will surface in the food sales index rising sharply in March (and to a lesser extent in April and the months to come) in contrast to the non-food sales plunging for an indefinite period of time until the situation returns to normal.

Although the shops had to impose safety regulations like limiting the number of customers or constantly disinfecting their space, food retail is among the sectors least-hurt by the ongoing chain of disruptions that have hit Europe’s economy. On the contrary, some retail chains facing problems in hiring staff see an opportunity in employing staff made redundant (or temporarily sent home) by non-food retailers.

Supermarket chain Profi in Romania, for instance, announced that it is “preparing to significantly increase its staff, because the company’s mission is no longer doing business but acting as a private entity that is feeding the population,” according to a statement by Profi Romania’s general manager.

In another strategic move, Kaufland, the largest food retailer in Romania, has announced that it will pay bills from its suppliers within seven days, compared to the usual 30 days. The measure was taken in the context of the coronavirus crisis, in order to secure the necessary stocks on the shelves. The company specifies that securing freight inventory is the most important goal, after the safety of customers, and that the measure will be applied to invoices already registered in the system.

Suppliers of food and drink have also benefitted. Valvis Holding, the group that owns the mineral water brand AQUA Carpatica, has seen a 250-300% increase in sales in recent weeks, the group’s founder and president Jean Valvis said, announcing that it is investing heavily into increasing production capacity.

In contrast, many non-food retailers in Romania have decided to discontinue operations at their physical outlets and move online, where possible. More retailers are likely to announce the closing of their local stores after the authorities closed down shopping malls as of March 23.

Polish discount fashion and home decor retailer Pepco, Danish furniture and home decor retailer JYSK, German footwear retailer Deichmann, French sports retailer Decathlon and French DIY retailer Leroy Merlin are among those who announced on March 23 that their physical stores will be closed in the following weeks. At the same time, most of them invited their customers to use the online stores — which is feasible for at least some of them. Swedish furniture retailer Ikea was among the first to close its physical stores in Romania.

But while some of the non-food retailers hope to continue operations online, like Deichmann or Decathlon, others don’t have such plans and their sales will plunge sharply. Polish discount chain Pepco, present in Romania with 200 shops, has announced that it will temporarily close all Romanian stores while its online presence is close to non-existent.

One segment of the non-food retailers has not shut down offline operations, namely the electro-IT retailers like Altex or Flanco. Both run significant online divisions and would not be particularly hurt by closing down their physical stores. Sales of electro-IT equipment have increased significantly on some segments, such as laptops, TV sets, and video game consoles, as schools in Romania are closed and many employees are working from home due to Covid-19 restrictions.