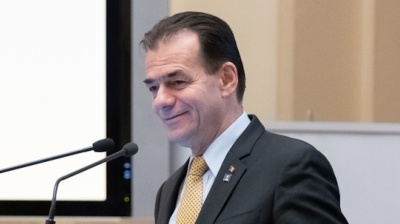 Romanian lawmakers passed a no-confidence motion against the government of Prime Minister Ludovic Orban on February 5 — just three months after it took office.

Should parties fail to install a new government, the vote could lead to an early general election, ahead of the term elections due to take place by the end of the year.

Both Orban and President Klaus Iohannis have said openly that they favour early elections which, if Orban’s National Liberal Party (PNL) performs well, would put him in a stronger position than he has been at the head of a fragile minority coalition.

After hours of debate in a joint sitting of the chambers of the parliament on February 5, 261 MPs, 28 more than needed, endorsed the motion.

The no-confidence motion was triggered by an attempt by the government to introduce two-round voting for mayors. As a direct effect of the vote, Romanian mayors will not be elected in two rounds. Both the PNL and the opposition Social Democratic Party (PSD) are in principle expected to gain from single-round local elections.

Initially, the PSD and the Democratic Alliance of Hungarians in Romania (UDMR), 208 MPs altogether, signed the motion. The PSD was counting on 232 votes, one vote under the threshold, in favour of its motion the day before the vote in parliament. However, the Pro Romania party of former prime minister Victor Ponta shifted the balance.

Following the vote, while negotiations are underway, the Liberal government will remain in place, with reduced powers.

Under the constitution, Iohannis must nominate a prime minister and submit the nomination to lawmakers. Only after two negative votes in parliament, can the president call early elections. The PNL is expected to nominate Orban for another term and the PSD — which is understood not to object to early elections — has three candidates on its list.

However, Orban’s government revealed the day before the vote that it had drafted an emergency decree to amend the electoral law for parliamentary elections. The new terms reportedly annoyed the Social Democrats, therefore any smooth scenario leading to early elections is no longer straightforward.

Belarusian police use stun grenades, pepper spray and fire shots to control Sunday's mass rallies
4 hours ago
Major fighting erupts between Armenia and Azerbaijan over Nagorno-Karabakh
9 hours ago
TURKEY INSIGHT: Follow the (hot) money
2 days ago
Lukashenko has isolated himself from the rest of the world with a secret inauguration
2 days ago
Iran’s oil minister openly admits forging export documents to dodge US sanctions
2 days ago