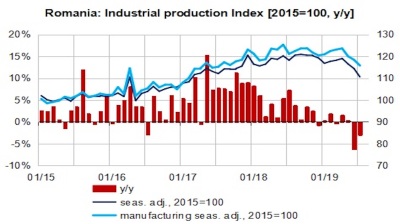 By Iulian Ernst in Bucharest September 13, 2019

Romania’s industrial production volume index contracted by 3% y/y in July, after an even steeper annual contraction (-6.2%) in June, the statistics office INS said. The seasonally adjusted index is the weakest in more than two years after the combined 5.1% drop in June-July.

Industrial growth has remained feeble since the beginning of the year, with the highest growth rate (+1.9%) in February. Nevertheless, the whole picture should be taken with a grain of salt: fewer shirts but more automobiles might mean overall low output but more value added (and consequently higher wages and profits). This was not the case in Q2, when the value added generated by industry contracted in annual terms, but the shift to higher value added industry involves a lower increase or even contraction of gross industrial production.

The July industrial production figures came as no surprise after weaker external demand, the main driver behind the industrial slowdown, surfaced in the foreign trade data: exports contracted by 5.5% y/y in June and by 1.1% y/y in July.

Looking in more detail for the dynamics of the core manufacturing industries, the picture is not much different from that given by the overall index. Seasonally adjusted production is the weakest since July 2017 and it plunged by 3.5% in June-July.

Light industry is, however, contracting by double digit rates in response to higher wages. This is not necessarily a negative development as long as the unemployment remains low (it edged marginally up in July, but remains at very low levels) and the average wage keep rising (it rose by double digits over the last few months).

Speaking of the electronic and optical equipment industry on the one hand and electrical equipment on the other — the two including the production of car parts that is an important part of Romanian industry, furthermore sensitive to the industrial contraction in Germany, the picture is mixed: in January-July, the growth rate was feeble (+0.7% y/y) for the former but significant (+3.6% y/y) for the latter.

The mining and quarrying sector posted negative performances in both June and July (-7%-8%).