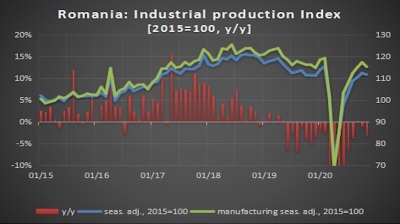 Romania's industrial production index, seasonally adjusted, edged down by 0.6% in November, compared to October, after six months of recovery, during which it made up for most of the deep plunge seen in March.

As of October, the index was only 2.7% behind the pre-crisis peak reached in February, but the recovery paused in November when the index slipped to -3.3% versus February.

The decline in November was more significant in the core manufacturing sector, where the seasonally adjusted index contracted by 1.7% compared to October. Still, the lag versus February is in line with the industry-wide 3.3% average.

For the whole January-November period, Romania's industrial output contracted by 10.2% y/y, with a slightly steeper (11.3%) decline in the manufacturing sector.