Romania’s industry contracts for the first time in 10 years 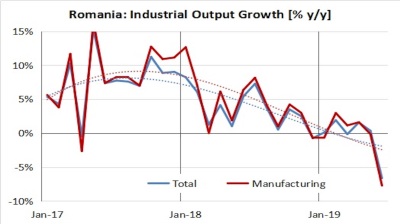 Romania’s industrial production plunged by 6.6% y/y in June, dragging down the quarter’s performance to negative 1.7% y/y — the first quarterly industrial output contraction in 10 years. In Q1, the industrial output edged up by a modest 0.6% y/y.

The seasonally and workday adjusted index edged down by 1% m/m in June, after a 2.1% monthly decline in May, resulting in the weakest industrial output since October 2017.

The developments in the core manufacturing industries were similar to the average industrial pattern, but slightly weaker than the average that was to some extent pushed up by the utilities sector that performed better.

Thus, the output in manufacturing industries contracted by 2.2% y/y in Q2, dragged down by the 7.7% annual contraction posted in June.

The production of traditionally robust industrial sectors disappointed in the second quarter: the production of transport means contracted by 10% y/y in June, pushing sector’s performance in Q2 down to negative 1.7% y/y after the impressive 8.5% y/y rise in Q1. Light industries posted double digit negative growth rates in both Q1 and Q2, as part of a broader shift toward more value-added and less labour-intensive sectors. There is hope that, supported by investments in production equipment, this will support growth despite the tight labour market, which is the main limit on further industrial expansion after ten years of significant growth. The industrial output in the past 12 months was 48% higher than that in 2008 before the recession, consistent with 4% average annual industrial growth over the past decade.