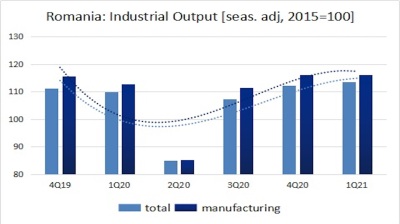 The annual growth rate (as strong as +14.6% y/y in the core manufacturing sector) was the steepest since May 2017. But this was largely a reflection of the lockdown enforced last year, on March 16, 2020.

The quarterly dynamics of the seasonally adjusted production index is a much better indicator of the state of the economy.

Thus, this seasonally adjusted quarterly indicator calculated for the core manufacturing industries remained steady in the first quarter of the year compared to the last quarter of 2020 after fully recovering from the deep dive taken during the lockdown.

The value of this indicator in Q1 was 0.5% above its value in the last quarter of 2019 — before the crisis. Notably, at that time, Romania's industry was not gaining momentum; on the contrary, it was slightly losing steam from a record 2018 performance fuelled by massive fiscal stimuli.

The adjusted industrial output plunged by one quarter until Q2 of 2020 (compared to pre-crisis) to fully recover by Q4 and remain steady in Q1 this year.

Further advances depend on the reconstruction of the global supply chains. Meanwhile, the the Relaunch and Resilience Programme — another major driver in principle — is not likely to have a significant impact until early next year.

The overall industrial production index (including mining, quarrying and utilities, besides manufacturing) followed a pretty similar trajectory with the core manufacturing sector. In Q1, it was 2.3% above the pre-crisis level (Q4, 2019).

But even if overall the output in Q1 this year recovered to pre-crisis level, there were winners and losers. The production in light industry contracted by 27-34%, and the refining of petroleum products by over 10%. In contrast, the output of the chemical industry surged by over 20% from the pre-crisis level, similarly to the output in the electric (+10%) and electronic (+20%) industries.