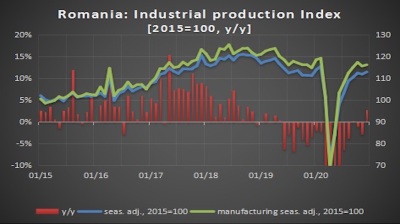 It was the second positive annual growth rate in more than a year and a half — since May 2019 — after the slim 0.2% y/y advance recorded in September.

Overall, Romania's industry ended the year with a sharp contraction of 9.8%.

Very few sectors managed to boast positive growth rates last year, mainly those propelled by the sanitary crisis: pharmaceuticals (+5%) and chemical products (+7.2%, partly driven by disinfectants, but also possibly by a disruption in imports of other chemicals).

However, the contraction in other sectors was uneven: while light industry plunged by nearly 30% amid weak domestic and foreign demand, other sectors, such as electronic and electric equipment and construction materials, posted small declines in the range of a couple of percentage points.

By broad categories of goods, at one extreme production of consumer durables inched up by 0.4% while production of capital goods plunged by 16%, with all the other categories in between. As regards the quarterly data, the industrial production was still in the negative area in the fourth quarter of the year (-0.6% year-on-year in Q4) while recovering after the plunge seen during the lockdown.

The seasonally adjusted index advanced by another 4.6% compared to Q3.

Romania’s public debt-to-GDP ratio up 12.4pp y/y to 47.7% at end-2020
Romania expects to get €720mn from sale of 5G licenses this year
Emerging Europe strong on women’s economic opportunities but dragged down by low pensions