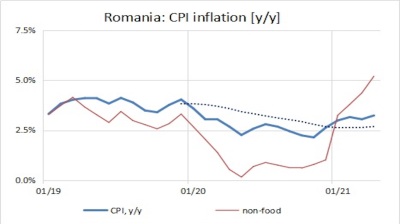 The headline consumer price inflation in Romania rose to 3.24% y/y in April from 3.05% y/y in March, reaching the steepest level since January 2020.

The disinflation episode that began in mid-2018 has clearly reached its end and the National Bank of Romania (BNR) announced it has already revised upward its inflation forecast to be published along with the quarterly Inflation Report on Mary 14.

Although half of the April inflation was caused by only two items, this does not necessarily mean that its increase compared to March overstates a trend or reflects increased volatility. Energy prices, including those of electricity and fuels, as well as those of other commodities (as pointed out by the BNR in its monetary policy decision earlier this month), are likely to rise as the global economy recovers. The trend toward more renewable energy is also likely to contribute to higher prices.

Food prices in Romania increased by only 0.76% y/y in May 2021, compared to the same month last year, and contributed 0.23pp to the overall inflation.

The average prices of services in May increased by 2.6% y/y with the prices of medical care (+5.27% y/y) making the strongest single contribution (+0.1pp).