Romania’s IT sector defies coronacrisis with robust growth in 2Q20 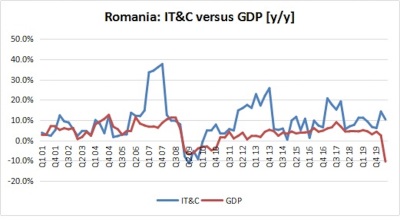 The value added generated by Romania’s IT&C sector increased by a real 10.4% y/y in Q2, defying the 10.5% GDP contraction.

Romania has a strong IT&C sector with major international companies entering the country, attracted by the skilled workforce and relatively low costs. This has encouraged the development of a homegrown industry too, with successful companies emerging in software as well as niches such as IT hardware and game development. Enterprise Robotic Process Automation (RPA) software company Uipath, the first Romania-born unicorn, was valued at over $10bn following its latest funding round in July.

The sector has constantly increased faster than the average GDP over the past decade, but its share in total GDP increased by only 3.3pp from 4.1% in 2Q10 to 7.4% in 2Q20.

Nearly half of the gain (1.5pp) was, however, achieved over the past year alone, when the sector outperformed other sectors, particularly industry and services to households.

The expansion of the country's IT&C becomes more visible when compared to industry: the value added generated by IT&C companies surpassed one third of that generated by industry (mining and quarrying included) in the second quarter this year. This is partly an effect of the subdued industrial activity, though. But the ratio — one to three in Q2 this year — was one to seven, ten years ago.

Thus, the value-added generated by the IT&C reached RON63.3bn (€13.2bn) in the rolling four quarters ending June 2020, out of a total GDP of RON1.05 trillion over the same period.

Pricing puts the offering’s valuation at PLN8.1bn, one of the biggest-ever IPOs on the Warsaw bourse.