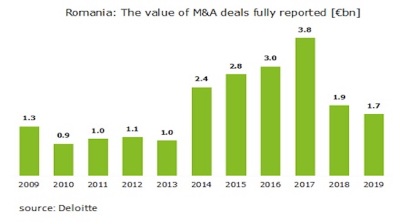 By Iulian Ernst in Bucharest January 9, 2020

The number of deals on Romania’s mergers and acquisitions market reached 110 in 2019, the highest count in the past ten years. The cumulative value of the transactions is estimated at between €4.0bn and €4.4bn up from €3.8bn to 4.3bn in 2018, according to a press release from consultancy firm Deloitte.

The value of the deals where the price was declared was €1.7bn in 2019 compared to €1.9bn in 2018, the consultancy firm reported, commenting on the smaller share of transactions where the partners agreed to fully disclose the financial terms: 22% in 2019 down from 39% in 2018.

"2019 was a year of intense activity in the mergers and acquisitions market, the number of transactions reaching a record of the last decade. After a weak start in a particular context, the market recovered from the second quarter, and the total number of transactions jumped by 100. However, we note that the tendency not to report their value, which we have observed in previous years, it became more accentuated: only 24 transactions had communicated value. In this context, estimating the market value has become rather an indicative evaluation exercise for our team,” said Ioana Filipescu Stamboli, corporate finance partner, Deloitte Romania.

The deals included by Deloitte in the M&A market, however, include deals not yet completed, such as the planned takeover of Banca Romaneasca by state-owned Eximbank — a deal Romania’s new Finance Minister Florin Citu has said “needs to be reviewed”.

It also includes deals where the economic focus is not particularly Romania — such as the new financing tranche raised by global tech unicorn UiPath founded by Romanian entrepreneur Daniel Dines, or global deals such as PRO TV being taken over by Czech investment fund PPF under a global deal, and pharma company Labormed being taken over under a regional deal by Czech-registered group Zentiva (controlled by US-based fund Advent) from Alvogen.

Among the biggest deals of 2019 were also the acquisition of betting company Superbet by investment fund Blackstone, and the takeover by INGKA of a group of seven wind farms in Romania from Vestas. Several big deals were also recorded on the real estate market, namely the takeover by AFI Europe of NEPI’s office portfolio and the acquisition of The Office project in Cluj-Napoca by the Paval brothers who own the Dedeman DIY chain.

Russia’s gross international reserves (GIR) topped $557.5bn on January 10, according to the Central Bank of Russia (CBR), surpassing the previous all-time high in 2008.

Most economies are failing to provide the conditions in which their citizens can thrive, said the World Economic Forum on releasing its new social mobility index.

Rise was driven by electronics and automotive sectors where foreign investors have developed production facilities, while light industry keeps losing ground due to the lack of workforce.

The headline figure also sees the PPI inflation rate below zero for the fifth consecutive month after an uninterrupted growth period of nearly three years.