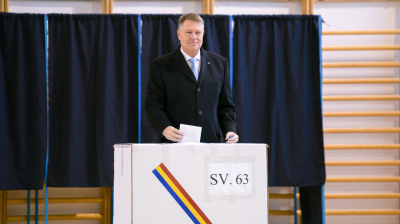 President Klaus Iohannis votes in the second round of Romania's presidential election, where he ran against PSD leader Viorica Dancila.
By bne IntelliNews November 25, 2019

Romania’s President Klaus Iohannis has won another term, cruising to victory in an easy second ballot against former prime minister Viorica Dancila. Iohannis had a convincing win on November 24, receiving two-thirds of the votes (67%).

Iohannis was an outside candidate when he was elected for his first term four years ago. For most of his presidency he clashed repeatedly against successive governments led by Dancila’s Social Democratic Party (PSD), not least over the PSD’s undermining of Romania’s once-robust anti-corruption drive.

Iohannis campaigned on a platform “For a normal Romania”, reflecting the fact that many Romanians simply aspire to live in a normal European country.

“Today is an extremely important day. We vote for the future of Romania, for the direction Romania will go on, for a modern and European Romania!” Iohannis said ahead of the vote on November 24.

Despite his calls on Romanians to cast their votes, however, turnout was low at around 50%.

While presidential candidates are supposed to abandon any party affiliation after their election, Iohannis’ win reinforces the position of the National Liberal Party (PNL), that backed him in the presidential election, and recently formed a new government.

After the extremely acrimonious relations between Iohannis and Dancila and her predecessor at the helm of the PSD, Liviu Dragnea, this is expected to lead to a period of stability — albeit a short one as Romania is heading for a general election next year.

Raiffeisen analysts note that Iohannis’ reelection “reduces political risks” in Romania, which has been wracked by political infighting and frequent policy reversals over the past three years.

“In the end, there was no surprise stemming from this year’s presidential elections. Still, investors have a lot to watch going forward, both in the very short-term and in the medium term. In the week ahead, the finance ministry will probably make public the second revision of the public budget plan for 2019. Recently, the finance minister said that public budget deficit could outpace 4% of GDP this year, much above the current target of 2.8% of GDP. So, public budget deficit target should be revised accordingly,” Raiffeisen analysts wrote early on November 25.

“With presidential elections out of the agenda, the government will have to make clear its plans regarding the fiscal policy for 2020, which should be of very interest for investors. Also, talks about early parliamentary elections should emerge as a key point on the political agenda starting as of this moment.”

Within a couple of months, Dancila’s PSD has been ousted from government and experienced its toughest defeat in any presidential election since the fall of communism.

While it has a solid supporter base, the PSD was tarnished among the wider electorate by its efforts to overhaul the judicial system, which sparked mass protests as they were seen as a transparent attempt to protect top politicians from prosecution in corruption cases.

The party is undergoing severe internal tensions. Immediately after the exit polls were released on November 24, Dancila stated that she would not step down but rather prepare the party for the local elections next year. Both internal rivals like Bucharest mayor Gabriela Firea and external rivals like former prime minister Victor Ponta have been vying for the position she has held since June when her predecessor as PSD leader and political sponsor, Dragnea, stepped down to serve a prison sentence for corruption.

However, as the parties start to line up for next year’s general election, the PSD is not the only one with internal tensions to address.

While the PNL now seems to enjoy a robust position, it still has some internal reforms to make. The merger between the PNL and the Liberal Democratic Party (PDL) of former president Traian Basescu back in 2014 has never been fully completed at local level. Traditionally strong in local elections, the PDL faction within the PNL is likely to gain a significant bargaining position after the local elections next year. The main risk is that the reformist potential of the PNL can be only limited so long as it is still dominated by political leaders from past decades who are not ready to promote new leaders, or able to achieve more than a decent functioning of the unreformed public administration as inherited from the Social Democrats.

The third major player on Romania’s political scene is the centre-right bloc formed by Save Romania Union (USR) and PLUS — a new force that aimed to bring a new vision to a political landscape where the main parties that have replaced each other in office for decades with mediocre results in terms of radically reforming the public sector.

USR-PLUS backs the PNL-led cabinet of Prime Minister Ludovic Orban, but ran its own presidential candidate, USR head Dan Barna, in the presidential election. However, Barca suffered significant political losses after his involvement in ambiguous if not illegal use of European funds surfaced. Despite being confirmed as USR president, Barna’s position remains fragile and PLUS leader, former technocratic prime minister Dacian Ciolos, might take the leading role ahead of the complex electoral year 2020.