Romania’s public debt to GDP ratio edged up by only 1.1pp in January-September 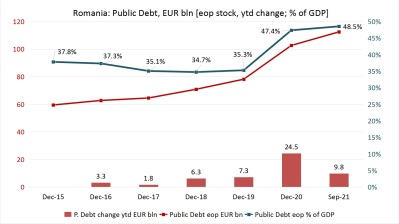 By Iulian Ernst in Bucharest December 9, 2021

Romania’s public debt rose by €9.8bn including the exchange rate effects in the first nine months of 2021 to RON556.4bn (€112.5bn) at the end of September, the Ministry of Finance announced on December 8.

Romania’s government borrowed about RON97bn in the first 11 months of this year, according to CursDeGuvernare calculations based on available official data.

The amount represents only 71% of the state's financing needs this year, namely the loans that the government has to make to finance the budget deficit and public debt.

The government issued one Eurobond less, compared to initial plans — and now it is running out of time after the political turmoil prevented the executive from tapping foreign markets. The government's strategy was to raise around €10.5bn this year with Eurobonds, and the two auctions so far have raised about €7bn.

In September alone, Romania’s public debt increased by RON6bn and yet, thanks to a changing GDP base, the ratio dropped by 1.2pp from 49.7% at the end of August to 48.5% at the end of September.

From a broader perspective, the country’s public debt rose by nearly RON56.5bn (€9.8bn including exchange rate effects) in the first nine months of 2021 while the debt-to-GDP ratio edged up by only 1.1pp from 47.4% at the end of 2020.

During 2020, the public debt soared by RON126bn while the debt-to-GDP ratio surged by more than 12pp due to adverse dynamics of the nominal GDP.

It is relevant that the (cash-based) budget deficit in 2020 neared 10% of GDP while it was only 3.8% of GDP in January-September this year.

The wide deficit planned by the government for Q4, however, will bring the debt to GDP ratio again close to 50%.

As the new ruling coalition promises to stick with a cash deficit target of 5.84% of GDP this year and the nominal GDP will rise, the indebtedness as reflected by the debt to GDP ratio would not rise much over 50% at the end of next year.

Romanian stock exchange reaches new record as BET-TR rises 5.7% ytd
3 hours ago
Population decline to take Emerging Europe back to the early 20th century
4 hours ago
Russia’s international reserves up $3.6bn in one week to $571bn
14 hours ago
CPI inflation in Moldova hits 33.6% y/y in July
1 day ago
How do high gas prices push up the cost of power?
1 day ago