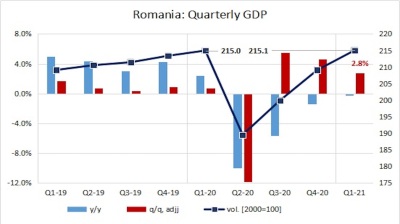 Romania’s economy performed above expectations in the first quarter of the year, when the GDP missed an outstanding full return to the level posted in the same period last year by only 0.2%.

The country’s seasonally adjusted GDP rose vigorously for the third consecutive quarter, nearly closing the gap prompted by the 11.8% deep dive taken by the country’s economy during the lockdown in Q2 last year, according to flash estimates released by the National Statistics Institute (INS) on May 18.

Thus, the GDP in the first quarter of this year was 2.8% higher than in the last quarter of 2020 — well above analysts’ expectations based on already stronger-than-expected Q4 economic performances.

To be precise, the economy has not returned exactly to the “pre-pandemic level” since the lockdown was introduced on March 16 last year. This not only slashed half a month of economic activity from the quarter’s GDP, but also allowed companies to defer their tax payments, which are counted as a part of the quarter’s GDP a well. The repayment of the deferred taxes in Q1 this year should be counted in the overall picture. Out of the RON18.1bn (over €3.6bn) tax credit extended by the Romanian government last year, mostly to firms, RON 5.36bn was already paid in the first quarter of the year. These €1.1bn dues to budget accrued during 2020 but paid in Q1 this year account for over 2% of the GDP in Q1, 2020, a significant correction to the “full GDP recovery” picture implied by the overall Q1 GDP figures.

As there are no details released along with the flash estimate, one can only guess the drivers of the outstanding performance, and the first suspect on the list is the public sector, via the deferred tax payments. Agriculture may have contributed as well, on low base effects, but this sector’s contribution in the first quarter of the year is seasonally weak. One thing is for sure: neither industry, nor construction boasted outstanding performances.

Analysts see the flash report released by INS as positive and expect the economic growth for the full year to beat the previous estimates.

"It is far above expectations. At first glance, after these data, we could have a y/y economic growth of 7%, it could be even more,” said Ionut Dumitru, chief economist of Raiffeisen Bank and former president of the Fiscal Council.

“[O]ne thing is certain: as we speak, the economy is above pre-pandemic levels! This is about one quarter earlier than we had envisaged and paves the way for a GDP growth rate in 2021 that could dwarf even our optimistic 5.5% forecast,” ING Bank chief economist Valentin Tataru said in a note.

Russian banks extend profits in August, on track to earn a record RUB2.5 trillion this year
13 hours ago
Russia’s PPI inflation up 1.5% to 28.6% in August
1 day ago
Montenegro’s economy posts strong 19% y/y growth in 2Q21, higher than EU average
2 days ago
Russia’s Duma elections statistics: the comet effect and the Moscow blob
4 days ago
Romania and Latvia's car ownership rates among lowest in Europe
4 days ago