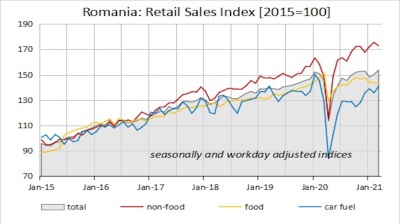 Romania’s retail sales volume index increased by 4.1% y/y in the first quarter of the year compared to the same period of 2020, after a record 9.1% annual increase in March — the highest yearly advance since last February.

Fewer expenses in other areas of households’ budgets (services, mainly, but also car fuel) and the constant increase of the real wages have both contributed to the record advance in non-food sales. In contrast, food sales have stabilised around the level seen at the end of 2019-early 2020, just before the crisis.

In Q1, food sales were up 0.1% in annual terms (but -2.1% y/y in March). The stabilisation occurs after a robust surge at an average annual rate of just over 9% over the previous five years. The rising food prices may explain to some extent the stagnation, which is still unexpected, particularly given the subdued activity in the HoReCa sector.

Finally, sales of car fuels took a deep dive in 2020 due to the mobility restrictions. In Q1 this year, the fuel sales were still 1.6% y/y lower compared to the same period of 2020, despite the 9.9% y/y annual increase in March.