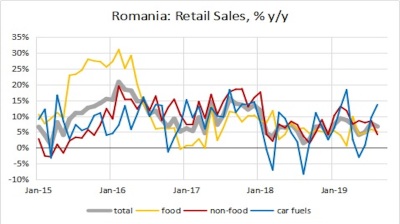 Romania’s retail sales volume index increased by 6.7% y/y in August, heralding a certain strengthening in the sales index in the third quarter of the year after its weakening to 5.4% y/y in Q2.

A more detailed picture shows, however, that food and particularly non-food sales are losing momentum, while the increase was supported during July-August to a large extent by the sales of car fuels, which are particularly volatile and responsive to energy prices.

The seasonally adjusted retail sales figures also confirm a certain moderation of Romania’s still buoyant rise in consumption. Thus, the seasonally adjusted non-food sales edged down for the second month in a row in August, by 0.9% m/m after the 1.3% decline in August. Overall, the retail sales advanced by 0.4% m/m in each of the two months, though, thanks to the robust increase in the sale of car fuels (+1.6%-1.7%).