Romania’s trade deficit hits 9.7% of GDP in 12 months to October 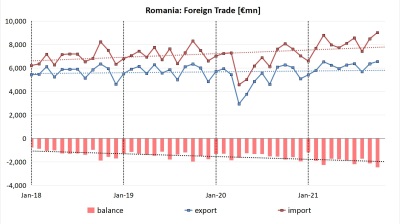 Romania’s trade deficit in the 12-month period ending October reached €22.7bn, or 9.7% of GDP, as the export-to-GDP ratio failed to recover to the pre-crisis level and the import-to-GDP rose driven by fiscal stimulus and higher commodity prices.

Romania’s exports and imports increased to record levels in October and the trade gap rose by 37% in the month, compared to the same month last year, to €2.47bn, according to the latest data released by the statistics office INS.

The annual growth rates for Romania’s exports, imports and trade gap are slightly above the medium-term trends as global trade is recovering from the slowdown experienced last year. Higher commodity prices and the global inflationary trend are contributing as well to better foreign trade figures toward the end of 2021.

This is visible from the 12-month trade gap expressed as a share of the latest available four-quarter GDP. This ratio, the dynamic trade gap to GDP ratio, reached 9.7% according to bne IntelliNews calculations, up from 8.3% as of October 2020 and 8.0% in October 2019.