Romania was the fastest growing EU economy in 4Q20 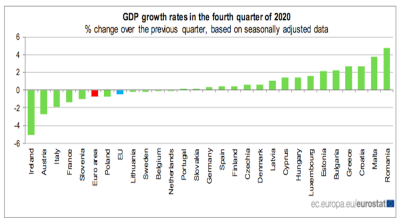 The first detailed estimates of Romania's Q4 GDP confirmed the robust recovery in the fourth quarter of the year when the country avoided imposing tight restrictions as elsewhere in Europe.

The statistics office, INS, revised downward the quarterly advance of the seasonally and workday adjusted GDP to 4.8% q/q (from 5.3% q/q under the February 16 flash estimate), but this is still the most robust performance among the European Union's members.

In the full year, Romania's GDP contracted by 3.9%, a performance better than initially anticipated, partly due to the surprisingly good outcome in Q4.

The real sector owes its performance to the relatively milder restrictions imposed in Romania in the last months of 2020 compared to other EU countries, as the severity of the second wave was softer in the country as well.

As the restrictions have remained (until now) milder in Romania than other European (mainly western) countries, the recovery might be asymmetric as well in the first quarter of 2021.

Regarding the structure of Romania's GDP, the sector of constructions was among the two sectors that made positive contributions to the GDP dynamics — in both Q4 and 2020 as a whole (+0.8pp and +0.6pp, respectively). The other sector was that of IT&C (+0.5pp and +0.6pp, respectively). The industry suffered most visibly, yet its negative contribution narrowed to -1.1pp in Q4 compared to -2pp on average for the whole year.

Milder compression of the domestic demand in Q4 and the whole year, compared to the negative output shock, was averse to external balance that shifted toward more net imports.

Primark to launch in Romania as it pursues CEE expansion
Nato rejects Russian request to withdraw from Bulgaria and Romania
OUTLOOK: 2022 Romania