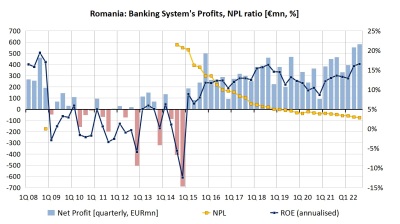 The aggregated net profit of Romanian banks surged to RON2.88bn (€581mn) in Q3, 25% more compared to the same period last year, according to calculations based on data published by the National Bank of Romania (BNR).

The outstanding performance of the banking system was partly driven by the advance of lending activity, but the higher interest rates also contributed.

The annualised return on equity (ROE) in January-September rose to 16.6%, a significant 3pp up from 13.6% in the same period last year.

During the third quarter of this year, the stock of bank loans increased by just over 16% compared to the same period last year.

Stronger lending resulted in better use of resources. The loan-to-deposit ratio rose to 73.4% – the highest level since Q3, 2019. The ratio, which reflects how efficient banks are in using the stock of deposits, plunged to 65.9% at the end of 2020 amid a significant accumulation of deposits during the lockdown period not matched by a similar pace of lending. But the government stepped in and backed corporate lending through various schemes and the ratio has improved.

The credit quality as reflected by the improved non-performing loan (NPL) ratio calculated under EBA methodology. The NPL ratio dropped to 2.8% at the end of Q3, from 3.0% at the end of Q2 and 3.7% at the end of Q3 last year. The ratio has constantly decreased since 2014 when first calculated – with a small increase in mid-2020 before the moratorium on bank loan repayment enforced by the National Bank of Romania (BNR).

The Kremlin secretly commissioned a series of focus groups to probe public attitudes about the war in Ukraine, and the findings aren’t encouraging for Russia’s president, Meduza reports.

Russia’s international reserves up by $10bn in the first week of November to $552.1bn