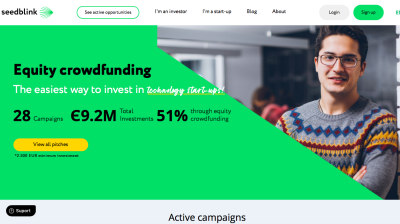 SeedBlink, the Romanian equity crowdfunding platform launched in December 2019 by former bankers Andrei Dudoiu and Ionut Patrahau, brokered almost half of the investment rounds carried by local startups in 2020.

Seedblink facilitated 26 of the 54 financing rounds in Romania last year.

It is already close to facilitating the first financing deal this year, for Plant an App, a Romanian software company that also operates in the US.

Over 3,000 investors from 12 countries used SeedBlink to become business angels or financiers of the local tech ecosystem.

"Together with our partners, we have raised more than €9mn on 13 different verticals in the industry. 70% of the startups listed on the platform are less than two years old," according to data provided by Seedblink. The minimum amount that an investor registered on SeedBlink.com can invest in a startup is €2,500, while the maximum limit is 15% of the crowdfunding campaign's value.

Most recently, Plant an App, which has developed a series of Low-Code Development applications, has started a fundraising campaign on the Seedblink.

The company also launched a similar campaign on the international platform Republic, in October 2020, and has raised €140,000 so far. It expects to raise around €400,000 more on Seedblink.

Plant an App is a spin-off of DNN Sharp, a company that the founders have run for the past ten years in the Developer Tools space. They developed a global network of about 4,000 partners and customers. The pre-listing Seedblink campaign for elite and classic members started on January 5 and will last until the evening of January 11. The public subscription will start on January 12.

Ultra-fast broadband access will reach about 90,000 households in rural areas.

“These days, the internet is like oxygen for people,” adds Rouhani protesting at move against cabinet member who allegedly refused to block Instagram.

Elbrus Capital, a leading private equity firm focusing on Russia and neighbouring countries, has attracted $260mn to launch its third fund. As reported by business daily Kommersant, the firm aims to raise $600mn in total by the end 2022.