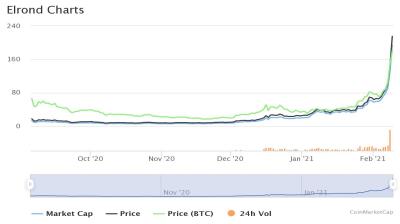 The market value of the ELGD digital currency, launched by Sibiu-based Elrond Network on its own blockchain system, passed the $3bn threshold on February 8, after surging by about $1bn (+50%) in 24 hours, according to data on coinmarketcap.com, which calculates the average trading price on several platforms.

The currency’s capitalisation had doubled over the previous week after breaking the $1bn benchmark on January 28.

EGLD went up to as high as $196 on February 8 before stabilising at around $180 throughout the day.

EGLD’s price has thus tripled in the last seven days, after the blockchain startup launched the Maiar application, a digital wallet that aims to compete with traditional payment applications on the market, such as Revolut, PayPal and Google Pay.

The company aims to reach one million registered users in the first month after its launch, Elrond co-founder and CEO Beniamin Mincu told local Ziarul Financiar. The company's long-term goal is to reach one billion users. However, it hasn't set a timeline for reaching this objective.

The company is also preparing to launch new features that would allow users to quickly send money from the app to their bank accounts as well as a card, thus aiming to offer a similar experience to traditional money management apps such as Revolut.

Romania’s public debt-to-GDP ratio up 12.4pp y/y to 47.7% at end-2020
Romania expects to get €720mn from sale of 5G licenses this year
Emerging Europe strong on women’s economic opportunities but dragged down by low pensions