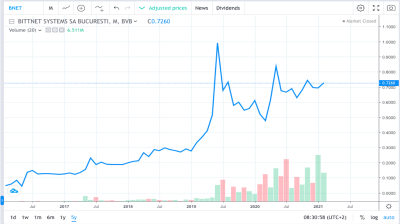 The shares of Romanian IT group Bittnet Systems (BNET) will enter the FTSE Global Micro Cap and FTSE Total-Cap indices as of March.

Thus, Romania will have four companies in the FTSE Russell indices: Bittnet Systems and TeraPlast (TRP) in the FTSE Global Micro Cap and FTSE Total-Cap indices, and Banca Transilvania (TLV) and Nuclearelectrica (SNN) shares in the Emerging Markets indices.

"FTSE Russell's announcement is very important news for the whole capital market and even more so for all those that chose to invest in Bittnet shares. Romania's upgrade to Secondary Emerging Market Status has benefits not only for companies that enter the indices for Emerging Markets but also for other companies that, once included in the indices for microcaps, enter the radars of new international investors that follow these indices," said Radu Hanga, chairman of the Bucharest Stock Exchange.

"The announcement of FTSE Russell to include Bittnet shares in its global indices is very satisfying because it is yet another confirmation that entrepreneurial companies, even when easily labeled as ‘small’, can bring significant liquidity to the market," added Cristian Logofatu, Bittnet Systems co-founder.

Founded in 2007, Bittnet’s main activity is sharing knowledge by developing and organising IT trainings, implementation of IT solutions and technical support services. It works with technologies from major companies including Cisco, Microsoft, Amazon Web Services (AWS), Citrix, Dell and Oracle.

In 2015, it became the first Romanian company to list on the BVB’s alternative AeRO market. Two years ago, founders Cristian and Mihai Logofatu, sold 14% of Bittnet’s shares on AeRO, making RON8.05mn (€1.72mn).

Tajik government has been trying for two years to boost state revenues by forcing tech firms like Microsoft, Google, Facebook and Booking.com to pay taxes inside Tajikistan.

Kaspi.kz has benefited from the coronavirus pandemic-driven shift to digital services by people who have been forced to largely stay indoors.