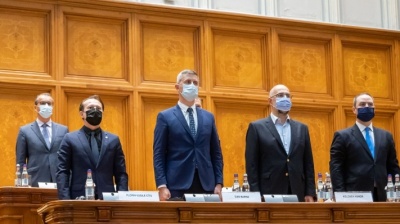 Florian Citu (left) said that he would take over the Ministry of Finance to “correct the mistakes”.
By bne IntelliNews July 9, 2021

Romanian Prime Minister Florin Citu has dismissed Minister of Finance Alexandru Nazare, claiming that his ministry lags on a large number of projects, including some essential for the absorption of European funds and for fighting tax evasion.

The decision followed the semi-annual evaluation of the ministers in his cabinet,  Citu explained. He said that he would take over the Ministry of Finance to “correct the mistakes”.

Citu said that he gave Nazare the chance to resign, but the former minister refused. Nazare in his turn denied any wrongdoing or underperformance at his ministry, outlining the targets he had met.

There is a political dimension of the scandal and there is an economic one to it.

In terms of politics, the dismissal causes even more bitter confrontation within the senior ruling Liberal Party (PNL), where Nazare comes from.  Nazare’s dismissal may have a political motive –  his dismissal fuels the fierce battle between Citu and his rival, Ludovic Orban, for the leadership of the Liberal Party.

PNL party leader Ludovic Orban claims that he hasn’t approved the dismissal and furthermore that Citu failed to get the approval of the ruling coalition’s leading body, which discussed the dismissal earlier in the morning.

Citu claims that he has got the ruling coalition’s permit to dismiss Nazare. It looks clear that he considers he can already speak on the behalf of the Liberal Party and ignore Orban, who still is the party leader until the party congress on September 25.

Nazare said that he was informed about the negative evaluation of his activity a couple of days before, ahead of the country's eurobond issue.

Dismissing Nazare before the eurobond would have had a negative impact but dismissing him afterwards has an impact as well.

Citu claims Nazare underperformed on tasks related to fighting tax evasion – a key element of the fiscal consolidation strategy that everybody is expecting - while the European Commission has indicated October 15 as the deadline for the medium-term strategy, under the Excessive Deficit Procedure.

The opposition is also pressuring Citu and for this it makes use of the fiscal budgtary responsibility law that stipulates measures to be taken as the public debt to GDP ratio crosses the 50% benchmark (which must have happened already although the official data was not released yet).

Citu not appointing a replacement indicates that he might be willing to deal himself with this, given his past experience at the Ministry of Finance. And perhaps he hopes to bring more credibility to fiscal stabilisation.