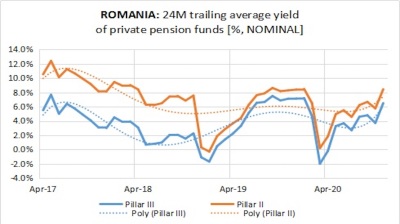 By Iulian Ernst in Bucharest January 8, 2021

The weighted average rate of return for mandatory private pension funds (Pillar II) in Romania went up to nearly 4.9% in November (for medium-risk funds), after plunging to just over 3% in April at the beginning of the coronavirus crisis, reported the financial markets' regulator ASF. For the higher-risk funds, the return neared 5%.

The dynamic of the pension funds has probably further improved, with the performance of the stock exchange, in December. The blue-chip index, BET, of the Bucharest Stock Exchange (BVB) is again close to 10,000 after the deep plunge taken in March.

The volume of assets under the management of the mandatory private pension fund managers rose to RON73.1bn (€15.3bn, 7.5% of GDP) at the end of November, up 20% from a year before.

The ASF also claims that the weighted rate of return for all medium-risk voluntary pension funds (Pillar III) was 5.3% as of November (and 5.1% for the higher-risk voluntary funds).

The methodology might be misleading, though: ASF defines the weighted rate of return (in line with its own regulations) as the weighted annualised average increase in the net assets per unit. It used to calculate the annualised weighted average for a 24-month period until last year but switched to a 60-month period recently. In any of the two cases, the rate of return is relevant for a bullet investment in the first month of the 24 (or 60) month period — and not for monthly payments.

A contributor who made equal monthly payments over the past 24 months derived an averaged return of 8.4%, as of November, for Pillar II (mandatory private pensions) and only 6.5% for Pillar III (voluntary private pensions), according to our calculations. In real terms, the yields were 6.3% and 4.4% respectively — with a significant 1.9pp differential.

Counter-intuitively, the returns derived by voluntary contributors have been consistently and constantly lower than those of mandatory contributors since the private pensions were launched.

Consequently, the voluntary private pension funds remain not particularly attractive and their capitalisation relatively low at RON2.85bn (€580mn) as of November.