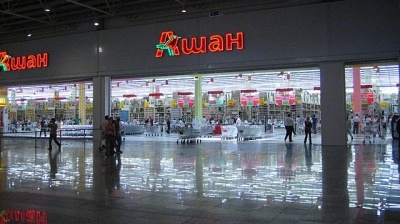 French supermarket chain Auchan is among the western multinationals which have not scaled back their operations in Russia. / Image: Wikimedia commons.
By bne IntelIiNews April 23, 2022

As the war in Ukraine intensifies, western governments are imposing ever greater sanctions designed to “limit the Kremlin’s political and economic options”, in the words of Ursula von der Leyen. Alongside this, many international businesses have suspended operations in Russia either as part of a moral stand or a commercial calculation. Over 750 companies have publicly announced that they are voluntarily reducing their activity in Russia beyond the minimum threshold required by sanctions.

But not all companies are eager to leave. Companies reluctant to quit the Russian market are sustaining significant reputational damage in the West, and are also having to endure increasingly inhospitable business conditions in Russia. With components and services more and more difficult to access in Russia, business as usual is hard to sustain. And foreign shareholders who insist on staying on Russian boards are making the day-to-day running of their companies difficult. With 80% of Russian banks under sanctions, western shareholders are obliged to abstain from most votes on securing credit, but the demands of running a company mean that simply avoiding all questions of financing is not a feasible strategy.

Some enterprises with heavy exposure to Russia may see leaving that market as too big a financial hit, while others say that exiting Russia now is equivalent to handing over their assets to the Kremlin.

The reluctance of French carmaker Renault to exit its Russian ventures, for example, was attributed to the high losses it could incur. Renault is one of the most exposed western carmakers in Russia, where it makes about 10% of its revenue.

However, Renault relented after pressure from stakeholders, announcing that it would halt operations at its Moscow factory. Renault is now rumoured to be considering offloading its 68% stake in Russian partner AvtoVAZ, which makes Ladas. A source close to AvtoVAZ told bne IntelliNews that the company is anticipating scaling back its operations as shortages of parts and capital hit production lines.

Renault rival Stellantis will also halt operations in Russia due to difficulty obtaining parts. The company, which announced the move on Tuesday, 19 April, blamed “the rapid daily increase in cross sanctions and logistical difficulties.

Logistics and targeted sanctions blocking the acquisition of components have been a thorn in the side for some of the western companies hoping to stick it out in Russia’s dwindling market. European ports are no longer accepting Russian goods – with the exceptions of gas, food and medical supplies – while Russian and Belarusian borders with Europe are reportedly closed to freight.

Too big to bail

Other companies maintaining operations in Russia say they are too big to leave. This is the case for France’s Mulliez Group, for example. Mulliez maintains that the enormous Russian exposure of its retail chain Auchan, home improvement store Leroy Merlin and sporting goods retailer Decathlon give it a unique responsibility its Russian employees. Auchan alone employs 30,000 people in Russia.

French energy giant TotalEnergies takes a similar line. In a statement on its website, the company explained why it had stopped short of the measures taken by rivals Shell and BP, who both said that they would exit Russian oil and gas and sell their Russian assets. A major factor in the decision to continue trading Russian liquefied natural gas (LNG) is to “help ensure the security of the European continent’s energy supply”, according to the statement.

“TotalEnergies is a European energy company that must contribute to the supply security of the European continent, which does not have the same domestic resources as other western countries such as the United Kingdom or the United States. In accordance with the European Union's decisions to maintain at this stage Russian gas supplies, TotalEnergies continues to supply Europe with liquefied natural gas from the Yamal LNG plant...” the company said.

The statement also says that TotalEnergies intends to stop buying Russian oil by the end of 2022.

Meanwhile, some companies dragging their heels in Russia are doing so for administrative reasons. Employment laws stipulate that any company suspending its operations in Russia is still obliged to pay its Russian workforce, while companies closing their operations entirely must give employees two months’ worth of salary. The Financial Times estimates that 200,000 workers in Russia are still in the pay of western multinationals.

Packaging and paper manufacturer Mondi employs 5,300 people in Russia. By continuing to operate there, Mondi is the only remaining British company graded as “F (defying demands for exit or reduction of activities)” on Yale’s CELI list of companies. Mondi’s mill in the Komi Republic also operates an integrated power plant which provides some of the area’s energy demand, and is the primary source of heat and warm water for around 60,000 people. Mondi says that it is legally required by Russian authorities to continue operating the mill in order to ensure the local energy supply.

In a statement published 10 March, Mondi said it was “assessing options” for Russian operations, but stressed that “this does not mean, or imply, that Mondi is planning, or initiating, any liquidation or bankruptcy proceedings in relation to any of its Russian subsidiaries or assets.”

When contacted for comment, a representative from Mondi told bne IntelliNews that “the assessment for legal separation is actively ongoing.” They did not expand on this, or respond to the question of whether Mondi had any intention of suspending or selling its Russian assets.

The US’s TJX, owner of off-price retailer TK Maxx, also appears to have run into administrative difficulties in offloading its Russian assets. TJX owns 25% of popular Russian apparel retailer Familia, the country’s leading off-price player, with more than 400 stores across the country.

TJX announced on March 3 that it intended to sell its stake in Familia, and its executives resigned from their positions with the company. However, the company has not yet divested. When bne IntelliNews asked TJX why it still owned its Russian asset, a representative of the company merely said: “We are committed to divesting our minority investment in Familia and continue to work toward that commitment.” They did not explain which precise obstacles were preventing TJX from offloading its share, saying only that “Beyond that, we wouldn’t have any updates at this time.”

A survey by BCG shows that investors don’t believe a return to Russia will be possible for at least the next two to five years. As the exodus gathers pace, western companies remaining in Russia will look increasingly exposed. With no sign that the war will subside or end in a quick victory for either side, expect to see still more companies jumping ship soon.

Czech government remains colour blind on green issues
2 hours ago
Poland ups the ante in feud with Brussels over judiciary reforms
13 hours ago
What's the current outlook for Belarus' export sector?
1 day ago
Russian gas exports to Europe tumble in June
1 day ago
Can we trust Russia’s economic statistics?
3 days ago