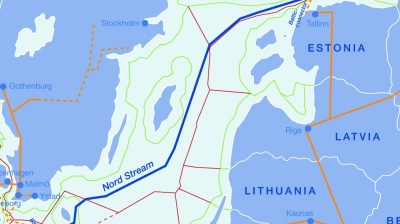 Russia’s Gazprom has announced it is slashing gas flow via the Nord Stream 1 pipeline by 60%, blaming Siemens’ failure to return compressor units on time that had been sent off for repair, as well as other technical difficulties at the Portovaya compressor station.
Gazprom reported on June 14 it was reducing gas supply via Nord Stream 1 to 100mn cubic metres per day, down from a previous plan of 167 mcm per day. It also said that Russian technical watchdog Rostekhnadzor had also drawn attention to other concerns at the facility, ordering a temporary halt for some equipment, pointing to Western sanctions as the cause. As a result, only three gas-pumping units remain in operation, it said.
The company followed this up with an announcement on June 15 that it was curtailing output at Portovaya further to 67 mcm per day, after taking additional Siemens equipment offline.
Gazprom’s announcements are ill-timed for European gas buyers, coinciding with a slump in US LNG supplies to Europe as a result of an explosion at the 15mn tonne per year (tpy) Freeport LNG in Texas on June 8. It is expected to take six months for operations at the  facility to be restored.
Meanwhile, Italy’s Eni also reported on June 15 that Gazprom had cut gas flow by 15%, without providing an explanation.
Gazprom has already cut off supply to gas buyers in Bulgaria, Denmark, Finland, Germany, Poland and the Netherlands, in most cases because those customers refused to comply with the Kremlin’s decree that requires them to open accounts at Gazprombank, where their Euro and US dollar-denominated payments for gas can be converted into rubles for transfer to Gazprom.
Germany has slammed the latest curtailment in its gas supply as a political move, despite Gazprom’s claim that technical problems are the cause.
“Russia’s reason [for reducing gas supplies] is just a pretext,” German Vice-Chancellor Robert Habeck said. “Their strategy is obviously to unsettle [people] and drive up prices.”
Restrictions on Nord Stream 1’s capacity will put pressure on the other routes that Russia uses to supply its gas to  Europe. Yamal-Europe, which typically pumps Siberian gas to Poland and Germany, has been flowing mostly in reverse since December, and Poland has also terminated its agreement with Russia on transiting gas via the pipeline.
Meanwhile, Kyiv in May terminated gas flow entering Ukraine at the Sokhranivka gas metering station, located on territory held by Russian forces. The Sokhranivka station typically handles about a third of Russian gas transit via Ukraine, and while the Ukrainian gas grid operator has said the route’s closure will not affect overall transit volumes, Gazprom has claimed the opposite.
This leaves TurkStream, the Russian-owned pipeline that runs under the Black Sea to Turkey, as the only route for Russian supply into Europe that has not been affected. Transit capacity will come under greater strain when Nord Stream 1 goes offline completely between July 11 and 21 for scheduled seasonal maintenance. TurkStream typically undergoes such maintenance over the summer, but Russia has not provided any guidance on this.
European gas prices have spiked this week on news of the Freeport LNG explosion and the curtailment of supply via Nord Stream 1, with the July contract at the Dutch TTF hub soaring by almost 19% on June 15 to over €118 ($123)/MWh, building on similar gains earlier in the week.
Analysts at Rystad Energy said the problems at Nord Stream 1 were “a significant test of Western government resolve on sanctions, as well as Russia’s technical capacity to operate its sector facing the risk of getting less support from Western technologies and services.”
“While minor pieces of gas infrastructure can be more easily fixed, heavy, technically complex technology will require maintenance and servicing that currently would need co-operation with the West,” the analysts said in a research note.
On the upside for European gas consumers, Rystad noted that Norwegian pipeline gas flow had returned to 317 mcm per day following the completion of planned maintenance at infrastructure sites.
“Still, this will make it a challenge for Europe to meet its storage target (achieving the 80% minimum storage level by 1 November) this winter as the region is now losing supply from East and West, and the continent could be in for a winter season of sustained high prices as a result,” the Norwegian consultancy said. “As the default options for European energy drop away to the east and west, the region will have to turn south to Africa and the Middle East for supplies, but the timeline for projects is likely to come too late for this winter.”

NEO: Why copper mining must clean up its act
Hungary secures increase in Russian gas supply
Russian GDP contracted by 4% y/y in the second quarter of 2022
Read in IntelliNews Pro
Get IntelliNews Pro