Russia faces a stagnant decade of 1.5% GDP growth after the coronacrisis 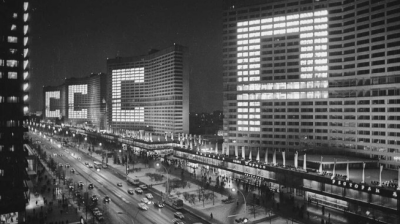 With a falling working population and low levels of investment Russia's growth in the next decade will be capped at about 1.5% / wiki
By Ben Aris in Berlin July 8, 2021

Iikka Korhonen, chief economist at Bank of Finland Institute for Economies in Transition (BOFIT), released a paper looking at Russia’s long-term growth potential and the outlook is bad. Unless the Kremlin can transform the way the economy works it will stagnate for the next decade and maybe longer.

Russia’s economy has bounced back from the coronacrisis faster and stronger than anyone was expecting. The government only invested about 3% of GDP into stimulus spending – one of the lowest amounts of any government – yet the recession in Russia (a 3% contraction in 2020) was milder than in most other large markets of the world.

The reason, economists speculate, is that the pandemic hurt the service industry first and foremost and Russia’s service industry remains relatively underdeveloped, giving it more resilience than most other countries.

Another contributing factor was after the initial lockdown in April last year, the government did not impose subsequent lockdowns when the second wave started at the end of the summer, which also helped support the recovery.

Now a third wave is sweeping Russia, and with daily infection rates leaping to over 20,000 a day at the start of July the government is still trying to avoid another economically debilitating lockdown, imposing instead stricter rules on testing and a coronavirus (COVID-19) passport system in the form of a government-issues QR code that shows the holder has either been vaccinated, tested in the last three days or has recovered from the virus and has antibodies. But the main thrust of the government strategy this summer is to persuade, cajole, pressure and outright order the population to get vaccinated.

As of June 7 the campaign seems to be working, as long queues have formed at inoculation stations and the share of those who have been vaccinated leaped 2pp in a week from 13% where it has been stuck for at least a month.

The Russian economy is anticipated to grow around 4% this year (estimates vary due to lingering uncertainty over the progress of the pandemic) but beyond that everyone agrees that growth will slow in 2022 and beyond as the bounce-back effect wears off.

The official growth estimates for this year are 3% growth slowing to 2.5% in 2022 and then rising again to 3% in 2023. However, Korhonen has one of the most pessimistic long-term views, saying that Russia’s growth will be limited to only 1.5% in the medium term to 2040.

There are many factors driving this gloomy prediction, but the most important is a shrinking labour pool and low levels of labour productivity which have plagued Russia’s economy for years.

“Russia’s economy has grown relatively slowly during the past decade, partly because of [its] declining labour force. In my revised framework, growth recovers after the negative COVID-19 shock, but remains subdued as the working-age population continues to dwindle. Productivity growth remains lower than in the early 2000s, while average GDP growth settles at approximately 1.5% p.a.,” says Korhonen.

Russia’s population returned to growth in 2008 and the demographic recovery outstripped even the most optimistic forecasts made by the international financial institutions (IFIs) at the start of the last decade. The Kremlin launched a highly successful children support programme that saw birth rates rise strongly and inbound immigration has also bolstered the growth of the natural population.

“Russia’s working-age population, which entered into decline over a decade ago, will continue to diminish during the next two decades. Immigration and raising of the retirement age can alleviate some of this contraction, but such measures are insufficient to stem the declining trend,” says Korhonen.

The cut to the demographic curve from the nightmare of the 90s when male life expectancy fell to just 57 years was very deep. The dip in the population it caused has just hit the working population. According to the UN’s July 2019 prediction, Russia's working-age population is expected to decline from 86.4mn in 2020 to 79.7mn in 2040, which translates into -0.4% change annually on average. 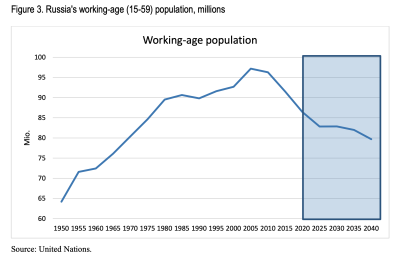 “Russia’s demographic developments are shown to play a significant role in its growth prospects. Indeed, Russia’s growth potential is weak as the working-age population is almost certain to decrease significantly over the next two decades,” says Korhonen.

The government has tried to counter the dent put in the demographic curve by raising the retirement age that should add millions of workers to the pool, but Korhonen argues the effect of this is limited as many pensioners already continue to work after they have official retired to make ends meet.

Another obvious problem for Russian economic growth is the low investment rate.

“Russia’s investment rate, slightly above 20%, is lower than in most European high-income economies. Indeed, the majority of fast-growing European emerging economies have been able to maintain investment rates around 30% of GDP or higher for several years,” says Korhonen.

The government hopes to hike fixed investment, especially into infrastructure, as encapsulated by the RUB27 trillion ($360bn) 12 national projects programme.

Lying behind this programme is an attempt to address Russia’s deep structural problems. The economy boomed in the noughties as Russia went through a phase of fast catch-up growth and there was even talks of overheating. However, petro-dollar driven catch-up growth was more or less exhausted by 2011 when growth started to slow, even though oil prices were still over $100. By 2013 that growth was completely exhausted and economic growth went negative. Since then no new model has been developed and no serious attempt to fix Russia’s economic problems has been made until now. 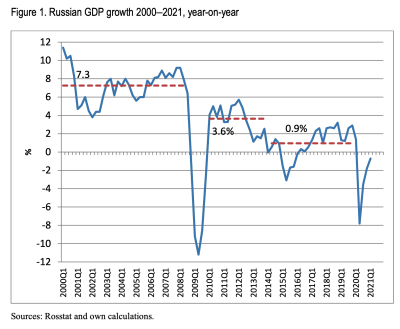 All those problems were made worse by the 2014 annexation of Crimea and the resulting sanctions. The International Monetary Fund (IMF) estimates that sanctions have shaved 0.2% off Russia’s growth every year between 2014 and 2018.

The government has amassed a huge amount of money, around $600bn in gross international reserves (GIR) as of July, but it has been reluctant to spend it. It has also been reluctant to increase debt, as that would expose Russia to Western pressure. The result is the economy is growing way under its potential given the size of the reserves it has at its disposal.

Economists remain sceptical that the Kremlin’s national project spending will appear, and if it does whether it will be efficient. Many of the biggest projects will be carried out by the largest state-owned enterprises (SOEs) and VEB.RF (formerly Vnesheconombank) has been reformed into an unofficial ministry of infrastructure, but few have confidence either can spend money well.

“Russia’s gross capital formation has been enough to increase its capital stock for some time now, but it is hard to foresee a sustainable acceleration in the rate of capital accumulation,” says Korhonen. 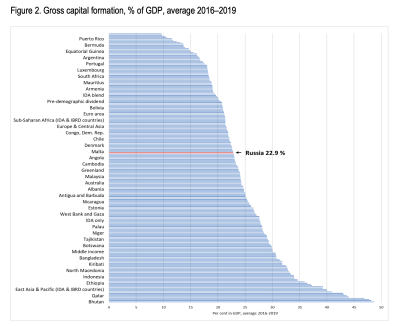 Korhonen’s assumptions about the capital stock’s growth rate have been revised down in his new assessment of Russia’s long-term growth potential.

“These three trends in combination suggest that Russia’s growth potential, even under the most favourable scenarios, is only about 1.5% p.a. over the next two decades. This is substantially lower than the growth rates during 2000-2008, when Russia’s real GDP expanded on average by almost 7.5% p.a. Moreover, most risks to the growth scenarios are on the downside. While it is uncertain how long the negative effects of COVID-19 pandemic will persist, the waning share of Russia’s contribution to the global economy is certain,” says Korhonen.

The birth of a Kazakh banking empire: ATF Bank
17 hours ago
CEPR's action plan for Ukraine's wartime economy
1 day ago
Missiles or sabotage: What caused the explosion at the Russian airbase in Crimea?
4 days ago
Population decline to take Emerging Europe back to the early 20th century
4 days ago
Czech government remains colour blind on green issues
4 days ago