Russia frowns on Kyrgyzstan “chaos”, warns it has “obligations” to prevent total breakdown in country 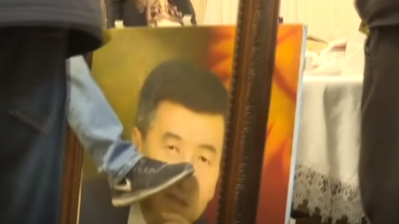 A protester kicks a portrait of President Sooronbay Jeenbekov during the Government House break-in in Bishkek that came after uproar broke out over the parliamentary election results that were "fixed" in the eyes of the opposition. / Screengrab, RFE/RL video.
By bne IntelIiNews October 8, 2020

Moscow said on October 8 that Kyrgyzstan has descended into chaos and that Russia has obligations under an existing security treaty to prevent the situation from totally breaking down. Russia has an air base in the former Soviet state where political chaos has prevailed since the claimed fixing of parliamentary elections at the weekend resulted in mass protests, the president going into hiding and the prime minister resigning.

“The situation looks like a mess and chaos”, Kremlin spokesman Dmitry Peskov told a briefing, while referring to the Russian “obligations” under a security treaty to avoid a complete breakdown of government, Reuters reported. Russian President Vladimir Putin stated on October 7 that Moscow was concerned by the political unrest in Kyrgyzstan and hoped for a swift return to stability. China, which borders Kyrgyzstan, said on the same day that it was highly concerned about the situation in Kyrgyzstan, now widely referred to as the "October Revolution", and hoped the country could stabilise as soon as possible, while safeguarding its independence, security and sovereignty.

Since the October 4 election, the Central Asian nation has been gripped by unrest amid its third revolution in 15 years and there are fears of mob rule. Protesters have stormed government buildings, broken into foreign-owned businesses including gold mining operations and various rival groups have jockeyed for and claimed power over the state apparatus. Parliament failed to gather a quorum in an overnight session, deputies said earlier on October 8. The failure has extended the power vacuum.

In another development showing the precariousness of the situation, Kyrgyzstan’s central bank on October 8 permitted financial institutions to reopen. They were ordered to close amid the chaose on October 6. But business associations warned the nation of 6.5mn could soon face food shortages if banks and tax offices remained shut and public safety could not be guaranteed.

Amid the scramble for power, it appears that at least three distinct groups have attempted to claim leadership. The first was a Coordination Council set up on October 6 and mainly composed of established political parties opposing Jeenbekov. The People’s Coordination Council, which says it is backed by many “young professionals” calling for a “clean generation of politicians”, announced its existence on October 7. It unites five lesser-known opposition parties whose leaders have not held any senior government positions and want a purge of the elite. Finally, the Ata Zhurt political party attempted to steal a march on competitors by getting parliament to nominate opposition politician Sadyr Japarov—freed from prison by protesters.

Among others with some backing to become prime minister are business man Tilek Toktogaziyev and Omurbek Babanov, who has already served as cabinet head.

Also notable—especially for those anxious that there could be a showdown between the north of the country centred on Biskhek and the south—is that Melis Myrzakmatov, former mayor of the southern city of Osh, returned to the city—sometimes referred to as “the capital of the south”—from Turkey on October 7 and immediately addressed thousands of supporters who had gathered in the city square. He said Kyrgyzstan was “in a very dangerous situation” and that "thieves and crooks” were preparing to sow confusion, “but we will not allow this and will fight for the country's integrity and its development", RFE/RL said. Myrzakmatov also reportedly urged those in the crowd "to preserve national unity and resist forces interested in organising a civil war and dividing the country."

The Association of Kyrgyzstan's Entrepreneurs announced on October 8 that they would nominate their own candidate for PM, namely Askar Sydykov, the executive director of the International Business Council.

The outgoing parliament has now split into two groups that meet separately outside its headquarters, which were ransacked by protesters. The group that met overnight in a hotel only included 40 MPs, according to local reports. Major decisions such as naming a cabinet require a 61-vote majority. One MP, Elvira Surabaldieva, posted a video from the meeting online, showing that it failed to pass a motion to impeach President Sooronbay Jeenbekov.

Jeenbekov’s whereabouts have remained unknown since October 6 although his spokeswoman told Russia’s TASS news agency he remained in Kyrgyzstan. She claimed he was personally holding talks with various political groups.

After a swathe of opposition parties refused to accept the election results, the central election commission annulled them on October 6. Jeenbekov, whom the results had favoured, did not protest at the decision.

One person has been killed and more than a thousand have been injured amid the unrest, which has also seen the removal of mayors and heads of regional government departments by force or voluntary resignation, officials said. Vigilante groups in Bishkek have scuffled with protesters and looters. Acting interior minister Kursan Asanov, who took over this week after running in the election as an opposition candidate, said police and vigilantes had managed to prevent mass looting in the capital, Reuters reported. He vowed to stop any attempts to further destabilise the country where ethnic violence left hundreds dead after president Kurmanbek Bakiyev was ousted in 2010 in another revolt. Kyrgyzstan also experienced a revolution in 2005.

In Bishkek, meanwhile, a group of 20-30 unidentified people broke into the office of the biggest gold mining company in Kyrgyzstan, Kumtor, owned by Canada’s Centerra Gold, as well as the Uchkun printing house and TV channels located in the same building, Sputnik Kyrgyzstan quoted the head of the press service of the Kumtor Gold Company, Marina Gavrilova, as saying on October 7.

“A group of 30 people entered the Uchkun building and then entered the Kumtor office. We are waiting for the police,” Gavrilova reportedly said, adding that there were no employees in the offices as everyone was working remotely due to the coronavirus (COVID-19) pandemic.

bneGREEN: Will India become too hot to live in?

bneGREEN: Climate change, war in Ukraine and rising prices create perfect storm threatening global food security
bneGREEN: Renewables set for record growth in 2022, but 2023 is not so rosy
bneGREEN: Will India become too hot to live in?

Russia has launched NashStore, its answer to Google Play. The platform was designed with the help of 700 Russian companies, and is intended to help circumvent sanctions. But it only offers a thousand apps at present, and has to be downloaded online.

Ukraine’s advance in the north-east is an impressive turnaround after Russian troops had attempted a siege on Kharkiv for two months.