Russia GDP growth up to 4.9% y/y in October due to base effects, but growth is slowing 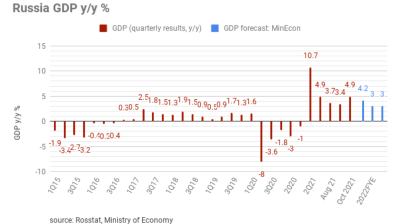 Russia's growth spiked to 4.9% in October but growth is expected to slow from here as base effects wear off and the economy returns to its mean. / bne IntellINews
By bne IntelliNews December 6, 2021

Russia turned in growth of 4.9% year on year in October, up from 3.7% a month earlier, but the good result was largely a result of surging oil production as the OPEC+ deal comes to an end and low base effects from the coronavirus (COVID-19) pandemic in 2020, say economists.

“The base effects from greater oil production improved Russia’s GDP growth in October, spiking to 4.9% y/y vs. 4.3% y/y in 3Q21. Apart from the energy sector, which is preparing to increase its output, the rest of the economy stabilised, moving below pre-COVID-19 rates,” Sova Capital said in a note.

Growth was also lifted by generous social payments made by the government in August and September to mitigate the impact the epidemic has had on the workforce. However, the social payments had no visible impact on retail sales in October, while the services PMI saw a downturn due to new COVID-19 related restrictions, although the manufacturing PMI continued to expand in October.

Russia’s economy has been enjoying a bounce-back effect after the vaccines were licensed in the autumn of 2020, but that growth is wearing off as the economy rebalances and the lack of deep structural reforms asserts itself again. Analysts are expecting the economy to slow from here and the official forecast of growth for the full year is 4.2%, according to the Economics Ministry. Moreover, a fourth wave of the virus has also slowed business activity and the first two cases of the even more infectious omicron strain were reported on December 6, which could lead to a fifth wave over the holidays.

“We expect Russia’s economic performance to weaken in 4Q21 due to less business activity because of the effect of COVID-19 related restrictions on the real economy (to a lesser extent) and services sector (to a larger extent). We expect GDP growth to slow to 2.7% y/y in 4Q21 and to average 4.1% y/y in FY21,” Sova Capital said.

At the same time, the base effects that are a result of the lockdown last April are starting to wear off as y/y comparisons start to go back to normal.

A boost in oil production has been a major contributor here as the production cut deal with OPEC comes to an end and Russian companies are starting to increase their output.

At the same time, manufacturing has also been enjoying the fruits of the bounce-back as supply chains are fixed and demand recovers. Nevertheless, manufacturing decelerated to 4.5% y/y in October vs. 5.1% y/y in previous months. In this category the major drivers were medical production; other machinery and equipment; other transportation equipment; beverages; coke; and refined petroleum products.

Electricity generation was also up 8% y/y, and water supply and sewerage was up 6.3% y/y.

Sova Capital calculated that excluding the base effects, October's growth rate moderated to 0.8% seasonally adjusted vs. 1.8% SA month on month in September and three months of negative-to-zero growth rates before that. Russia’s economy contracted in the first two months of this year and growth only reappeared in March.

“Most sectors saw a contraction apart from mining and quarrying (+1.6% SA m/m). Mining support service activities contributed the most to the expansion for the second month in a row (4.9% SA m/m and 5.9% SA m/m), increasing the potential production from oilfields. Other minerals were up 6.6% SA m/m in October vs. 4.7% SA m/m in September,” Sova Capital said.

One bright spot in the results is the agricultural sector returned to positive growth after contracting earlier in this year: agriculture was up 5.5% y/y in October after contracting 5.8% y/y in September and 10.1% y/y in August. However, agricultural output was still 2.9% and 1.3% below the levels seen in 2020 and 2019 respectively.

The improved freedom of movement also lifted the transportation segment, which continued to recover and was up 5.5% y/y in October vs. 5.1% y/y in September and 6% y/y in August.

Construction was one of the laggards, as it was hit by severe labour shortages during the worst of the epidemic months and investors scaled back their plans due to the uncertainty. The segment saw no growth for the second month in a row, while the growth in fixed asset investments slowed to 7.8% y/y in 3Q21 vs. an 11% y/y increase in 2Q21 on the back of base effects.

With the population back on the streets and in the shops consumer demand for goods and services normalised and the effects from the government social payments wore off. The growth in retail sales slowed to 4.1% y/y in October vs. the Bloomberg consensus estimate of 4.9% y/y. With no additional outlays, real spending was at 0.1% SA m/m in October vs. 0.6% SA m/m and 0.7% SA m/m in August and September respectively, Sova Capital reports.

While food demand was unchanged at 0.8% SA m/m for the second month in a row, non-food demand contracted 0.1% SA m/m in October after increasing 0.7% SA m/m in September and 1.0% SA m/m in August. Both market services and public catering turnover slowed to 14.2% y/y and 12.3% y/y respectively, suggesting contractions of 1.4% SA m/m.

Higher interest rates did not keep loan demand from households from expanding. Although analysts saw some moderation y/y, sequential growth rates pointed to a persistent expansion in retail demand (+23.6% y/y and +1.7% SA m/m) and mortgages (+25.4% y/y and +2.3% SA m/m). The Central Bank of Russia (CBR) has been concerned with the appearance of a consumer loans bubble and increased the prudential requirements on banks making retail loans to try to slow the growth of loans somewhat.

“Russia’s y/y economic growth accelerated thanks to the low base effects in the energy sector. The Ministry of Economic Development estimates that Russia’s GDP growth spiked to 4.9% y/y in October vs. 4.3% y/y in 3Q21. The omicron strain of COVID-19 and the non-working period in early November are likely to slow Russia’s overall recovery in 4Q21, but the recovery in oil production is likely to have established a floor for growth rates. We expect GDP growth to slow to 2.7% y/y in 4Q21 and overall GDP growth to average 4.1% y/y in FY21,” Sova Capital said.