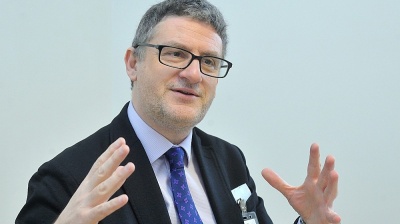 The Kremlin has continued its campaign against the international press and banned 29 journalists, settling some old scores in the process. / wiki
By Ben Aris in Berlin June 15, 2022

"The British journalists on the list are involved in the deliberate dissemination of false and one-sided information about Russia and the events in Ukraine and Donbas," the Russian foreign ministry said in a statement.

From the British journalists in the Moscow press corporate only Shaun Walker of The Guardian was banned. Walker spent a decade in Moscow where he made his name covering the Maidan revolution in Ukraine in 2014 before being hired by The Guardian to become its Central and Eastern Europe correspondent. He left Russia to take up this new post and visits only occasionally, but has been in Ukraine recently to cover the war.

Oddly Galeotti’s name was included amongst the journalists. One of the best known commentators on Russia, who appears regularly in the Western press, as well as writing the monthly Stolypin column for bne IntelliNews, Galeotti is political consultant and academic by profession, not a journalist.

The author of a number of successful books, including We need to talk about Putin, A short history of Russia and The Vory, Russia’s super-mafia, Galeotti’s ban has caused particular outcry on social media, as he is widely respected as being one of the few balanced and well-informed commentators on Russia, even if he remains highly critical of the Kremlin.

The ban is revenge on the UK, which has been vociferously critical of Russia and the war and has been actively sending arms and materiel to Ukraine. The British press has been demonising Russian President Vladimir Putin for decades and carried overwhelming negative stories about the country, even before the war in Ukraine started.

Another prominent name on the list was that of The Guardian’s Luke Harding, also a former Moscow correspondent who served during Putin’s first term in office and made a name for himself by harshly criticising Putin and Russia in the early noughties after the arrest of oligarch Mikhail Khodorkovsky, but at a time when the economy was booming.

Shortly after that Harding was refused entry into Russia after his name appeared on an op-ed written by oligarch Boris Berezovsky from self-imposed exile, where he said he would fund an armed insurrection to overthrow Putin. The Kremlin was incensed, and Harding began to be harassed by the FSB, he told bne IntelliNews at the time. Harding claimed that he was the first journalist to be expelled from Russia since the end of the Soviet Union.

Also the author of a number of books, including The Mafia State and Collusion, Harding’s star has waned somewhat since, especially after former Special Counsel Robert Mueller's investigation into Russian efforts to interfere in the 2016 United States presidential election found there was no collusion.

The Kremlin has been tightening the screws on international media and has closed almost all of the domestic opposition media. The second prominent Western journalist to have their visa rescinded was the BBC’s Sarah Rainsford in August 2021, which marked the start of the current campaign against Western reporters.

A fluent Russian speaker who had spent more than 20 years reporting on Russia, Rainsford’s expulsion was seen as push back by the Kremlin for increasingly harsh criticism of the Kremlin’s rapidly growing repression that year as it began to shutter opposition media and political groups. Activist Alexei Navalny had been arrested in January that year, causing a storm of criticism in the international media that the Kremlin was trying to shrug off.

The new list also contains the names of 20 British officials and figures linked to the defence industry, including Air Chief Marshal Sir Michael Wigston, the head of the Royal Air Force (RAF), and MP Leo Docherty.

"People linked to the British defence complex are involved in making decisions on the supply of weapons to Ukraine," the Russian foreign ministry said.