Russia, Kazakhstan pushing for oil production increases on the back of coronavirus vaccine-fuelled oil price optimism 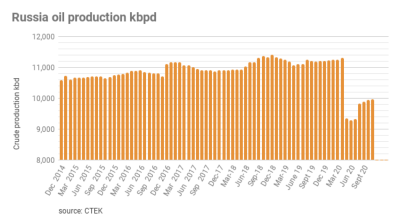 Russia and Kazakhstan have won a concession from OPEC to increase production in the coming months at the expense of the Kingdom of Saudi Arabia, which remains concerned that the second wave of the coronavirus (COVID-19) pandemic will depress demand in 2021.

OPEC+ has agreed to modestly increase output in January, revising its original schedule of quota relaxations at a members meeting in Vienna in the first week of January. The alliance of oil producers will boost production by 500,000 barrels per day (bpd) next month.

Russia leads the associated block that would like to see production increased as prices recover somewhat on the back of a nascent economic recovery and the positive COVID-19 vaccine news.

Oil markets have cheered the news of a deal between the parties. While the decision to boost output will increase supply on the global market, it left traders bullish about the strength of the OPEC+ alliance.

The combined OPEC+ group of oil producers has agreed to allow Kazakhstan to raise its oil output levels by 10,000 bpd in February and March as part of a larger agreement struck on January 5 to roll over existing oil output levels into February. The decision similarly has allowed Russia to raise its output by 65,000 bpd. The agreement includes Saudi Arabia voluntarily cutting production below its quota. OPEC+ includes the 13 members of the Saudi-dominated OPEC cartel and 10 allied oil-producing nations led by Russia.

Saudi has resisted the idea of boosting oil output in February by another 500,000 bpd.

Moscow is concerned about the falling level of oil production and the impact that this has on its budget revenues. Having cut the breakeven price of oil, it needs to balance the budget to around $40. Russia can bear lower prices and is keen to make up what it loses from low prices by gaining from more production.

The average Urals oil price plummeted by 34.38% year on year in 2020 to $41.73 per barrel, the Russian Ministry of Finance said in the first week of January.

Russia's production of oil and gas condensate dropped by 8.6% to 512,680,000 tonnes in 2020, according to data from the Central Dispatching Department of the Fuel and Energy Sector.

Volatility in the oil market in 2021 will decrease and oil demand will grow by 3-5mn bpd. Nevertheless, it will not reach the pre-crisis level, which was higher by 6-7mn bpd against the level of 2020, Russian Deputy Prime Minister Alexander Novak said in an interview with Rossiya 24 TV channel this week.

“We expect that demand will recover during 2021. As you know, it is still below the pre-crisis level by about 6-7mn barrels per day. During 2021, there will be 3-5mn barrels of demand growth,” he said.

In an effort to keep the OPEC+ group together Saudi Arabia has offered voluntarily to cut production by 1mn bpd during the next two months to accommodate Russia and Kazakhstan, while all other members will keep their output steady.

The agreement led to a rally in oil prices, with Brent crude climbing 5% to $53.65 on the news.

The latest agreement would reduce the group’s total output cut to about 7mn bpd.

OPEC+ will meet again in March to discuss April output.

CAUCASUS BLOG : What can Biden offer the Caucasus and Stans, all but forgotten about by Trump?
Private finance mobilised by development banks up 9% to $175bn in 2019
LONG READ: The oligarch problem