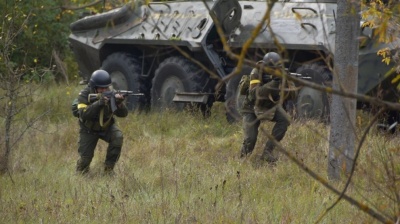 On September 21, Russian President Vladimir Putin announced a “partial” mobilisation to support his troops in Ukraine, which are currently under heavy pressure from Ukraine’s counter-offensive across the entire front line. After Putin met with Belarusian President Alexander Lukashenko on September 26-27, rumours soon began to spread about an imminent Belarusian mobilisation that would then participate in a new offensive against Kyiv.

However, no mobilisation appears to have taken place, although military activity in Belarus has noticeably increased.

On September 29, Belarus’ Defence Ministry announced that reservists would only receive draft notices for scheduled “military reserve training events”, to go through medical examination or to have their personal information updated at their local enlistment office. According to the ministry: “All the existing threats and challenges are being neutralised by the current state security and military security system.”

While mobilisation does not appear to be taking place in Belarus, Lukashenko may very well have to support Putin in opening up Ukraine’s northern front in a similar manner to that in the early stages of the invasion.

According to the independent Belarusian Hajun monitoring project, an unexpected batch of Russian SU-30SM fighters landed in Belarus on September 29. Moreover, the Deputy Head of the Main Operative Directorate of Ukraine’s General Staff reported that measures were underway to repair barracks, dormitories, warehouses and more at the Luninets Air Force Base in Belarus (just 50 km from its border with Ukraine). These repair works indicate preparations for a long-term use of the airfield.

Similar preparations are also being done at Belarus’ Zyabrauka airfield (located just 25 km from its border with Ukraine), where a Russian S-400 anti-aircraft missile division and several radar stations are currently stationed. Near the Belarusian town of Osipovichi (180 km from Belarus border with Ukraine), components of an Iskander missile division were also detected.

According to the Belarusian Hajun Project, these preparations could indicate a future intensification of Russian missile strikes on Ukraine from Belarusian territory.

Furthermore, Ukraine’s Defence Intelligence Ministry has reported that Belarus is currently preparing to accommodate 20,000 recently mobilised Russian soldiers. These soldiers are supposed to arrive in Ukraine to replenish the Russian troops already stationed in Belarus.

To accommodate these new troops, Ukrainian intelligence claims that Belarus will use military funds, civilian premises and buildings, warehouses, hangers and abandoned agricultural enterprises. Belarusian railways are currently being prepared to transport troops and military hardware, and a mobilisation of civilian trucks and cars is also anticipated, in order to fill in for the lack of transport equipment.

According to Ukrainian military expert Oleg Zhadnov, Putin has not changed his strategic goal of completely absorbing Ukraine and that while Lukashenko may provide Putin with the necessary infrastructure, ammunition and stored military equipment, he will try not to let his own army be sent into Ukraine.

This is due to the fact that if the Belarusian army becomes engaged in the war, it will be subordinated to the Joint Staff of the Belarusian-Russian Union State. As other analysts have also previously pointed out, Lukashenko cannot afford to lose control of the country’s army, which is one of his means of maintaining power.

The Belarusian Hajun Project also points out that Lukashenko is likely afraid of the public backlash that a participation of the Belarusian Armed Forces in the invasion would entail.

It's therefore possible that Lukashenko is helping Putin to open up Ukraine’s Northern front anew, but it will likely be without Belarusian troops. However, even if nobody knows exactly when Putin may be planning to strike against Kyiv again, the Ukrainians are not standing idle.

Speaking about the possibility of Russian soldiers crossing over the Belarus-Ukraine border, Ukraine’s Presidential Advisor Aleksey Arestovich hinted that Ukraine might strike before Russian soldiers cross the Belarusian-Ukrainian border. He also stressed that “this time we will not be sentimental. I mean not when they cross the border, but before they cross the border. No one will wait for the next Bucha.”

Ukraine’s Armed Forces recently finished their exercise “Northern Storm” together with Ukraine’s National Guard aimed at ambushing and slowing down enemy forces, which could cross over into Ukrainian territory from Belarus.

Since Russian forces withdrew from the Kyiv region in spring, Ukraine has bolstered its defences along its border with Belarus in the form of blocking off roads, laying minefields and practising defensive strategies.

Both Oleg Zhdanov and the Belarusian Hajun Project believe that Ukraine will be ready to meet a possible renewed Russian invasion from Belarus. In order to begin a new offensive, the Russian troops in Belarus will likely have to be deployed along the border for a month if not more. The invasion force should also have to be larger than the first on in September, which numbered 15,000-30,000 soldiers.

Considering Ukraine’s preparations and its sophisticated intelligence gathering, such deployment patterns will not go unnoticed.