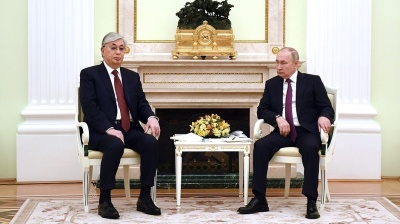 The proposed gas union was reportedly discussed at a meeting between Russian President Vladimir Putin and his Kazakh counterpart Kassym-Jomart Tokayev in Moscow. / Kremlin.ru
By Muzaffar Ismailov in Tashkent November 30, 2022

Uzbekistan may become a member of a proposed "gas union" alongside Russia and Kazakhstan, Kommersant reported with reference to the press secretary of the Kazakh president, Ruslan Zheldibai.

According to Zheldibai, Kazakh President Kassym-Jomart Tokayev and his Russian counterpart Vladimir Putin discussed a plan for a possible union at a meeting in Moscow on November 28. He added that the main goal of the union was the coordination of actions for the transportation of Russian gas through the territories of Kazakhstan and Uzbekistan.

Faced with increasingly tough Western sanctions since the invasion of Ukraine, Russia has been seeking to reorient its exports of oil and gas eastwards, to China and other Asian markets.

EU states are currently discussing a gas price cap for Russian gas imports, though have so far failed to reach agreement on how high the cap should be.

The initiator of the idea of creating a gas union was Putin, Tokayev's spokesman said. The leader of the Russian Federation is going to discuss this issue with the President of Uzbekistan Shavkat Mirziyoyev by phone.

Russia’s Energy Minister Alexander Novak confirmed the negotiations on the creation of the association at the IV Russian-Chinese Energy Business Forum.

"Russia, Kazakhstan and Uzbekistan are discussing the possibility of creating a gas union," the Russian official said.

Kremlin spokesman Dmitry Peskov also confirmed the talks on a gas union, with the aim of coordinating supply plans.

Peskov said, as quoted by Kommersant, that energy supply routes in the region are "extremely relevant” and that he believes a gas union "will meet the interests of all three countries”.

“Of course, this idea and initiative will take shape in some way. I mean in terms of formulating clear contours. We are talking about the fact that this is a huge, vast territory in a very important region,” Peskov added, reported Kommersant.

It is currently unclear whether Tashkent will opt to join the mooted union.

“We have enough reasons to say no. Firstly, if Uzbekistan starts cooperation in terms of the sale and purchase of energy with Russia, it in the end would lose its energy and geopolitical independence. Secondly, this would allow Russia to extend its ‘northern imperialistic viability’. Uzbekistan is the most geopolitically independent state in Central Asia. It can enter and leave the CSTO whenever it wants. It also enjoys observing the relationship of EEU states within the organisation, even if it is not its member. Under these circumstances, does one believe that the country would join the new ‘union’? Definitely not,” Rabbimov said.