Russia real estate investment volumes up by a quarter to $1.6bn in 1H2019

Investment into Russia’s real estate was up by a quarter to $1.6bn.
By bne IntelliNews July 3, 2019

Investment into Russia’s real estate was up by a quarter (24%) year-on-year in the first half of this year to $1.6bn, according to a report from JLL released on July 3.

In the second quarter of this year investments reached $643m, which was 13% higher than in the same period a year earlier.

“Growth in the first half of this year can be explained by the closure of several large transactions. Increased stability in the financial markets and the CBR easing monetary policy are helping the recovery of real estate investment market activity,” said Natalia Tischendorf, executive board member, head of capital markets, JLL, Russia & CIS.

“Additionally, investor attention is attracted by the positive spread between current prime yields and bank financing costs in rubles, that appeared approximately one year ago for the first time in Russia real estate market. It is expected that the key rate will be cut further this year, which will result in a further decline of interest rates for senior debt. This will positively affect the investment market.” 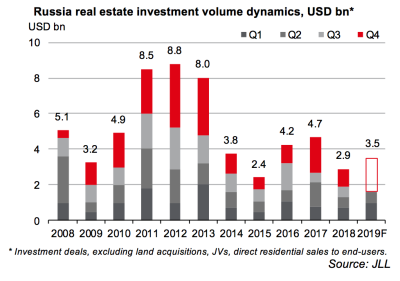 Russia’s real estate deals used to be conducted in and priced in US dollars, but the result of the deep devaluation of the ruble in 2014 following the collapse of the oil prices resulted in an across the board switch into pricing and paying for real estate deals in rubles.

The office sector received the most investor attention in the first half of this year, taking a third (35%) of the total invested. The largest office deals in the second quarter were the sales of building 3 in the office complex Aquamarine and the purchase of an asset portfolio in Moscow by Avangard bank.

The residential sector attracted the next largest share of total investments and accounted for 31% of the total. The largest deal in the sector was the purchase of the Moscow Fat Factory site in Tekstilshchiki for a residential project by PIK Group.

The retail sector completed the top three, with 21% of the total volume; a vital part of retail investments was formed by investment company Bonum Capital that acquired the liabilities of Tsvetnoy central market from Sberbank. 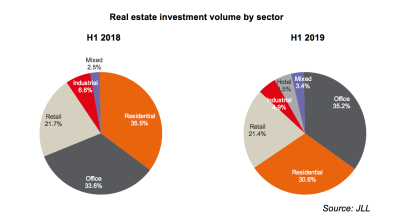 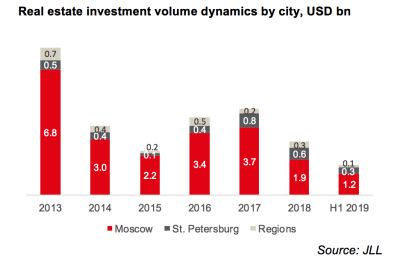 Moscow remains the most important destination for investment and accounts for three quarters (72%) of all investments into Russia. That is up from half (56%) in the same period a year earlier.

The share of external capital in the investment volume decreased to 12% compared to 28% a year earlier, due to the absence of public deals with foreign investors in the second quarter of this year. The decline in overseas investors' activity in Russia correlates with the global trend of a decrease in foreign investments. The global volume of cross-border transactions declined by 17% y/y to $44bn.

Olesya Dzuba, head of research, JLL, Russia & CIS, said: “The Russian market faces a shortage of real estate products available for purchase. Nevertheless, with increased stability and in the absence of external shocks, the recovery of real estate investment activity could intensify. Among the positive factors are ruble strengthening in H1 2019, reduction of inflationary pressure and the key rate cut to 7.5%. We still expect the 2019 investment volumes to reach $3.5bn.”