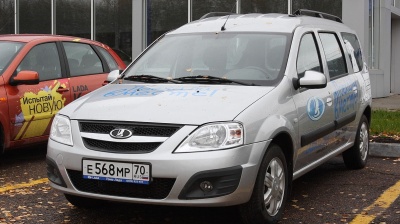 Sanctions have brought Russia’s car market screeching to a halt, but Russian automakers hope growing cooperation with Iranian peers will help to right the situation, partly by addressing a lack of auto parts available on the sanctions-hit market.

As part of the announced deal, the SAIPA-produced Renault Logan, a rebadged car known as the L90 Tondar, will be made with a Lada Largus engine. The Lada Largus is also essentially rebadged, sold as a version of the Renault-developed first generation Dacia Logan MCV.

Iranian automakers are all too familiar with the struggle to source parts to keep production lines open. Prior to the waves of sanctions directed at Russia after its Ukraine invasion, Iran was the most sanctioned country in the world. Alongside cooperation in the automotive industry, Russia and Iran are poised to introduce significant cooperation in other industries including aviation. Cooperation in industries such as oil and gas and goods transit is, meanwhile, being stepped up.

Renault officially departed Iran following the reimposition of sanctions on the country by the US Trump administration in 2018. The company no longer featured in the supply chain from the following year.

SAIPA is considering several options for power plants for the local Logan. These are 1.6-litre engines with a capacities of 90 and 106 horsepower, while there is also a 122-horsepower, 1.8-litre engine.

Previously, Russian companies including automakers feared invoking secondary US sanctions by supplying Iranian counterparts, but given Russia’s current predicament, such anxieties no longer have much relevance.

At the end of August, it was reported that sales of Iranian cars made by Iran’s biggest car maker Iran Khodro (IKCO) could begin in Russia. In Moscow, the sedans Dena, Tara and Runna + were presented. They could compete with Russian Lada models.

On August 15, IKCO CEO Mehdi Khatibi said that the company had held talks with Moscow and the Russian market would become "one of the most important for it."

IKCO supplied some of its vehicles to Russia between 2007 and 2009, but the arrangement did not work out. Only a few IKCO cars remain on the roads of Russia. A decade ago, some buyers complained that Iranian cars could not handle cold Russian winters. There were also objections to poor-quality parts.

IKCO sold cars in Russia that were based on old Peugeots - for example, the Samand model, which is nothing more than a Peugeot 405 from the 1980s.

By the end of the 2000s, the Samand was seen in Russia as outdated. The country was busy actively developing the production of Western, Korean and Japanese brands that offered more interesting models.

Since then, IKCO has taken a step forward in terms of its range of cars. They include a recently released small crossover model, the Rira, based on a Groupe Peugeot Societe Anonyme (Groupe PSA) platform from 2017.

First official results from Bosnian elections put nationalists ahead after exit polls predicted losses
5 hours ago
Georgian MPs want to rid the country of oligarchs, but not all of them
5 hours ago
Hungary agrees on deferred payments with Gazprom for winter gas deliveries
6 hours ago
US sanctions Russia’s CBR head Nabiullina and other officials
6 hours ago
Russia prepares for new attacks against Ukraine from Belarusian territory
6 hours ago